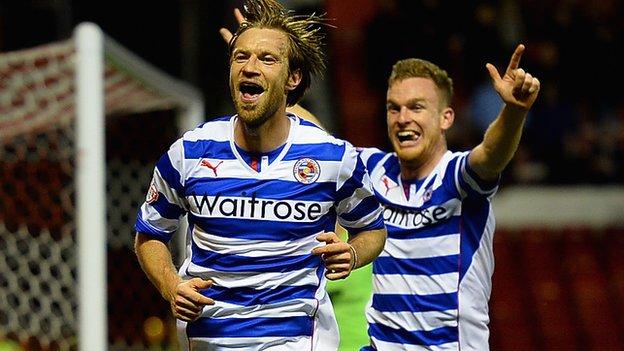 Jordan Obita scored the winner for Reading in a thrilling encounter against Nottingham Forest.

Pavel Pogrebnyak's close-range strike put the Royals into the lead before Kaspars Gorkss headed in a second.

Simon Cox's sliding effort before the break got Forest back in the game and Darius Henderson angled a low shot home in the second half to equalise.

But Obita's powerful strike put Reading back in front and the Royals held on despite Chris Gunter's late dismissal.

Former Forest defender Gunter was given his marching orders after picking up his second yellow card with nine minutes remaining, but Nigel Adkins' side still ended their four-match winless run.

Confidence would have been high when Reading took the lead in the eighth-minute.

The Royals have yet to lose a Championship game this season when they have taken the lead and Pogrebnyak put them ahead with his effort from Garath McCleary's ball in.

Just five minutes later their lead was doubled when Danny Guthrie's corner was met by Gorkss' diving header for his first goal of the season.

McCleary then had a chance to extend Reading's lead with Forest under severe pressure but the midfielder wasted his chance.

Despite their below-par display in the opening half, Forest managed to find a route back into the game before the break.

Jamie Mackie burst clear before playing a low ball across the area in the 40th minute that was met by Cox sliding in for his third goal in as many games.

Forest manager Billy Davies was not impressed by his side's first-half display and made a double change at the break with Henderson and Andy Reid coming on for Radoslaw Majewski and Jamie Paterson.

And the two substitutes played pivotal roles in Forest's equaliser as Reid's pass to Cox was laid off by the Republic of Ireland international for Henderson and he fired home.

Forest were now on top, playing with more confidence than the side under pressure in the first half, Mackie striking the post.

Despite their much improved second half, Forest were still open at the back and Obita made them pay with 16 minutes to go as he found the net to lift the Royals up to fourth.