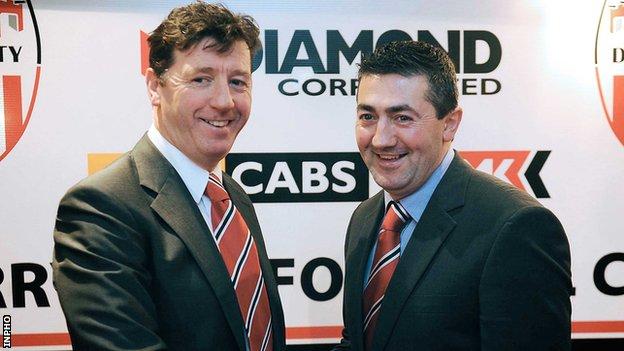 Peter Hutton dubbed him 'The Quiet One' but Derry City's new manager is one of the most colourful and charismatic figures in the local game.

Of course, Hutton, who will join Roddy Collins as his assistant at the Brandywell, was making a tongue-in-check comment but the 'dream team' have hit the ground running.

Collins was an early favourite to succeed Declan Devine, who left by 'mutual consent' at the end of the season, before finally landing the job after the club's board considered a number of high-profile candidates.

"I've always admired Peter (Hutton). And worse than that, my wife has admired him!

And the Dubliner wasted little time in declaring his ambitions when he was unveiled at a packed Derry City FC Social Club.

"And if I don't do that, I'm an absolute total and complete failure."

Collins hit all the right notes on his first day, captivating his audience with a speech which was peppered with light-hearted quips:

"I've always admired Peter (Hutton). And worse than that, my wife has admired him!.

"I want Peter with me. I just made one condition - I said to Peter 'Don't ever wear a better suit that me. And thankfully, Peter obliged today!"

Hutton's involvement is a shrewd move on the part of Collins, an appointment which immediately appeals to the local support even if his own one may divide opinion.

The last time the Candystripes won the league was back in 1997 when, ironically, Hutton was the skipper and Felix Healy the manager.

Last season's top goal scorer Rory Patterson is just one player out of contract who will want clarity on his future.

Collins actually cut his managerial teeth in the Irish League with Bangor back in 1995.

He won a league and cup double with Bohemians and led unfashionable Carlisle United to the final of the LDV Vans Cup in Cardiff's Millennium Stadium.

His stints at Dublin City, Shamrock Rovers and Floriana in Malta were all too brief but he guided each of his last two club's, Monaghan United and Athlone Town, to promotion to the League of Ireland Premier Division.

He felt Athlone's ambition failed to match his own so he left.

Now he's got the job he always craved and he has a glint in his eye.

He intends to carry on the tradition of bringing through talented youngsters from within the club's youth structure.

And although his contract is on an initial one-year deal, he insists he is here for the long haul. He will relocate to the north-west area.

The 52-year-old will command the respect of the dressing room straight away and will be unfazed by making the hard calls.

There will never be a shortage of headlines coming out of the Brandywell with Roddy around.

Darren Kelly, the former City and Portadown defender who also played under him at Carlisle, describes him as "a player's man".

He has hunger, desire and enthusiasm in abundance. He says he thinks about the game 24 hours a day.

The 2014 League of Ireland season may be over three months away, but a wind of optimism is already sweeping across the famous old stadium on the Lone Moor Road.