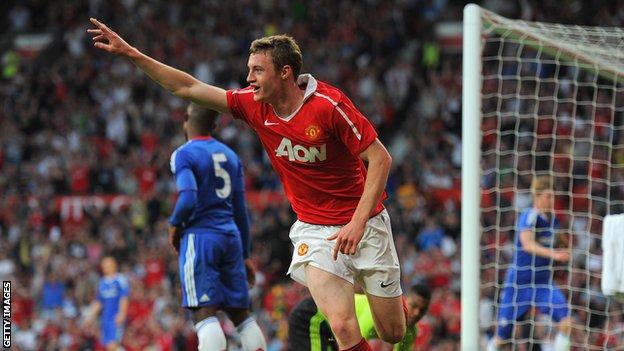 Wigan Athletic manager Owen Coyle says the Championship club have a verbal agreement to sign striker Will Keane on loan from Manchester United.

The 20-year-old, who has made one substitute appearance for United, has recently returned to fitness after 16 months out with a serious knee problem.

Keane picked up a slight injury while with England's Under-21 side last week.

But Coyle is confident he will recover quickly and a deal could be completed after Saturday's game with Brighton.

"I spoke to [United manager] David Moyes on Wednesday," the Scot told BBC Radio Manchester. "Given the lad's had a serious injury, we'll always be guided by Manchester United in terms of when they feel is the right time for him to go out on loan.

"I think this week will be too soon, given the slight knock he had, but if he recovers from that and the medical team are happy with him, there's a possibility we could have that sorted by next week.

"We have a tremendous relationship and David has said he'll keep me up to speed."

Keane, who won the FA Youth Cup with United in 2011, made his only senior appearance for the Premier League champions in December of that year and was tipped for a first-team breakthrough before rupturing his cruciate ligament while on international duty with England's Under-19 team.

His twin brother, Michael, is also part of the squad at Old Trafford.

"He [Keane] knows where the goal is but he's a real team player," added Coyle. "He plays beyond his years in terms of his knowledge of the game. It will be great to add somebody of that quality to the squad.

"We've already seen success with Nick Powell and Will is certainly another one in that bracket."