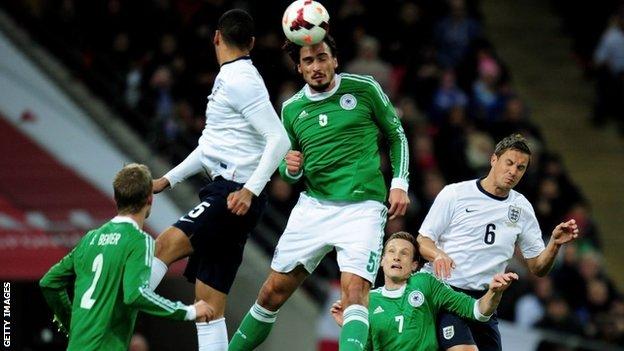 Borussia Dortmund centre-back Mats Hummels has been ruled out until January with an ankle injury, meaning he will miss Saturday's match with Bayern Munich.

Hummels and fellow defender Marcel Schmelzer were both injured for Germany in Tuesday's 1-0 win over England.

Left-back Schmelzer will also miss Saturday's game after being sidelined for three weeks with a calf injury.

Dortmund have signed free agent Manuel Friedrich until the end of the season.

Friedrich, 34, has won nine caps for Germany and was available after being released by Bayer Leverkusen at the end of last season.

The former Manchester City player came off at half-time at Wembley for Hummels, who only lasted 20 minutes before twisting his ankle after a header.

But on Wednesday Boateng told Bayern's website: "I'm in good shape and I can play."

Before the game, Dortmund fans questioned why Bayern duo Philipp Lahm and Manuel Neuer were sent back to Bayern Munich before the England match. Five of the starting 11 for Germany at Wembley were Dortmund players.

Dortmund host Bayern on Saturday at 17:30 GMT. The visitors are four points clear of their arch-rivals after 12 games.

The news comes as a blow to Dortmund, as another key centre-back, Neven Subotic, is out for the rest of the season with a knee injury.