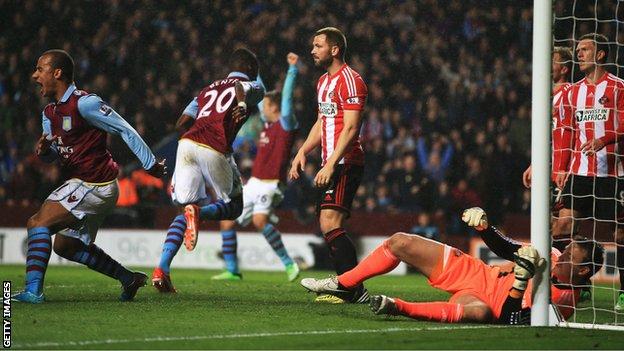 The Black Cats travel to Villa Park on Saturday, their first visit since a second-half collapse saw then-manager Paolo Di Canio suffer the first loss of

"We still remember the pain as a squad, an experience like that won't go away quickly," Larsson told BBC Newcastle.

"Neither should it. It's in the back of our minds so we can never forget it."

On a personal level, the 28-year-old has endured a forgettable couple of weeks.

He was part of the Sweden team and the Sunderland side that to maintain their 100% defeat record on the road this season and drop to the bottom of the Premier League.

"Quite honestly, it's one of the worst weeks I've ever had," said Larsson.

"To not make the World Cup when you're so close is up there as one of the biggest blows of my career, and the Stoke game capped off a very bad week."

Sunderland had Wes Brown sent off at the Britannia Stadium, their fourth dismissal this term, but have since had

Sunderland boss Gus Poyet has lost every away game since taking over:

his side have scored three own goals and received three red cards - all away from Wearside.

"There's been a few funny old games," Larsson commented. "For Gus's first game at Swansea, we conceded two own goals and a penalty.

"Then within a couple of minutes at Hull we had two men sent off.

"But things happen in football and you just get on with it, there's no point dwelling.

"Obviously it didn't make it easy for us in those games, but there is no way we're going to blame our away form on bad luck."