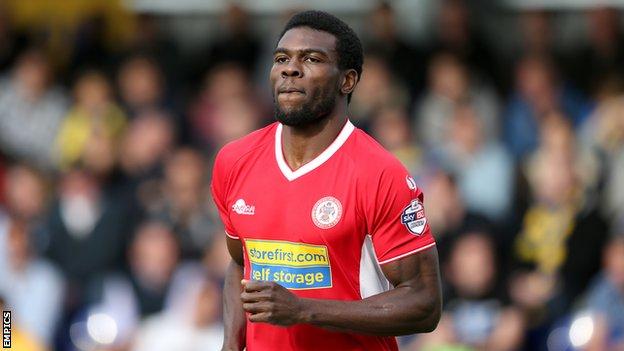 Peter Murphy was brought down inside the box and Danny Webber despatched the resulting spot-kick, before Kayode Odejayi fired in from close range.

Fleetwood's Antoni Sarcevic struck the crossbar in a quiet first half.

Accrington have taken 18 points during their unbeaten sequence, having collected only two points from their first 10 league fixtures.

Meanwhile, with Oxford, Chesterfield and Rochdale all failing to register a victory on Tuesday, the Cod Army missed the chance to go top of League Two.

VIEW FROM THE DRESSING ROOMS

"I'm very proud of the lads. They're starting to produce results that I always believed were there. They're believing in themselves and enjoying their football.

"Fleetwood are one of the favourites for promotion. They looked fit and strong and they started really well. We did well to handle them in the first 20 minutes.

"Danny Webber and James Gray have been unlucky because the players that have come in for them have done well and they've had to have a stint on the sidelines. They've reacted magnificently to it - how I would want the players to react."

"Up until the penalty, it was a game we weren't going to lose.

"We defended really solidly and created chances which we didn't take. You have to take your chances when they come along.

"We've given a poor penalty away and then after that, we lost our way a little bit in our decision-making and conceded another goal. After that, we didn't really look as if we were going to get a goal."