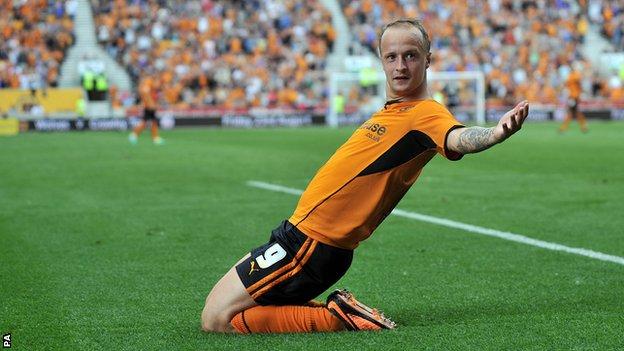 Wolves struck two first-half goals as they outplayed Tranmere to return to the top of League One.

The hosts took the lead when top scorer Leigh Griffiths' speculative shot from 25 yards was fumbled in by Rovers goalkeeper Owain Fon Williams for his 12th goal of the campaign.

The home side then doubled their lead on 42 minutes through Dave Edwards.

The fit-again midfielder climbed well to head his first goal of the season from Bakary Sako's near-post corner.

Griffiths was replaced at the break by Jake Cassidy, who came on to face the club where he had spent time on loan in each of the past two seasons.

Cassidy should have scored with his first touch, only to steer his right-foot shot wide with Fon Williams exposed.

On a night when Wolves could have won by more against a Rovers side who had won 5-1 at Coventry on Saturday, Fon Williams saved again with his legs to deny Sako in the dying seconds.

"We've played a super side. They were streets ahead of us and sometimes you just have to hold your hands up.

"You look at their budget and our budget, and that's what you get. I don't think there's any disgrace in coming here and getting beaten.

"Owain Fon Williams has got his head in his hands, but he kept us in the game on Saturday at Coventry with two great saves. That's football. He's just got to get on with it."