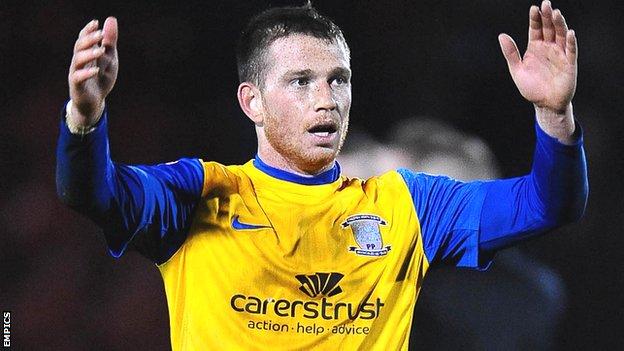 Kilkenny had to be persuaded to leave the pitch as Preston boss Simon Grayson remonstrated with Mr Madley.

But striker Garner went on to score in each half to hand 10-man North End a fourth straight away win in League One.

The first was an unstoppable 18-yard shot that found the top-right corner.

Vale top scorer Tom Pope then had a header cleared off the line, while substitute Gavin Tomlin fired wide from long range.

But the visitors caught Vale on the break and Garner's penalty, after Chris Neal tripped substitute Will Hayhurst, ensured that Preston came out on top in the first league meeting between the two sides in 20 years.

"To be honest, I saw Griff down on the floor, I could hear the crowd screaming for something and I did see someone throwing a punch but I couldn't tell you who it was.

"But, when a side goes down to 10 men so early, if you don't beat them you have got to ask questions why. We lost because we weren't good enough - all 14 of us. And, if you want to include me in that, all 15 of us, because I picked the side.

"We looked lethargic in the first half, didn't pass the ball early enough, didn't get it wide, didn't cross the ball from the right areas and played too many straight balls.

"But you have got to give credit to Preston. Against 11 men it would have been difficult. They are a good side. They went down to Orient, the league leaders and beat them and won their last three away games coming into this one without conceding a goal so it was always going to be difficult."

"Going down to 10 men early in the game, we knew we had to work hard against a team that have won five out of their last six games.

"We've done well. There are different ways of winning football matches and we've had to defend for our lives."

On Neil Kilkenny's red card: "I don't want to do an Arsene Wenger but it's a big pitch and there were bodies in the way.

"The referee's made a decision that we're obviously disappointed with because you don't want to be down to 10 men against a good team, but the lads showed so much character and desire to get a result."