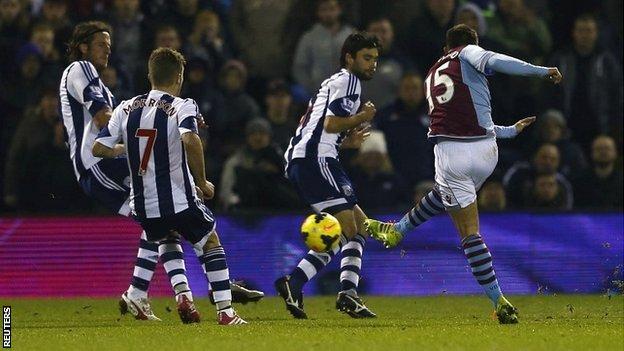 Aston Villa came from two goals down to draw with West Bromwich Albion in a thrilling West Midlands derby.

The hosts established their early dominance as Shane Long scored twice in the first 11 minutes.

He controlled superbly to fire in from 18 yards before chipping over Brad Guzan after Leandro Bacuna's poor pass.

But Villa were transformed by a triple substitution around the hour mark, with Karim El Ahmadi volleying in before Ashley Westwood's fierce 25-yard shot.

It was an unexpected turnaround at The Hawthorns after a poor first half from the visitors, but the introduction of Andreas Weimann, Gabriel Agbonlahor and Fabian Delph paid instant dividends as the sides produced a repeat of the result in last season's corresponding fixture.

On that occasion it was West Brom who were two goals in arrears before they salvaged a draw, and after another entertaining game huge credit must go to Villa boss Paul Lambert, who masterminded his side's change in approach.

Sharing the points means Albion - in 11th place - stay one position ahead of their rivals on goal difference, with both sides moving to 15 points.

After failing to score in four Premier League games, Villa have now scored four goals in their last two, with none from leading scorer Christian Benteke

Steve Clarke's West Brom have now lost only one of their last nine Premier League games, but they will regret failing to convert their early dominance into a three-goal lead.

As much as Long's direct running and rasping shooting caused Villa nightmares, the visitors' defensive organisation in the first half left much to be desired.

The opener was a superb piece of control as Long took down Chris Brunt's long pass, but with plenty of time to do so, the 26-year-old skipped past Nathan Baker before leaving no chance for the diving Guzan.

Despite going close with Aleksandar Tonev's deflected shot soon after, Villa went further behind and this time the defending was even worse.

With the Villa defence split to play the ball out, right-back Bacuna mishit a pass towards the centre of the defence, found Long rather than a team-mate, and the striker beat Baker again and chipped over Guzan for his third of the season.

Aston Villa have won seven points from losing positions in the Premier League this season, more than any other side.

Marshalled by Youssouf Mulumbu and Claudio Yacob in central midfield, West Brom continued to press high up the pitch, and they could have gone further ahead when Long fired straight at Guzan.

Lambert gave his side 12 minutes of the second half to show some willingness and, when there was no change, he made his triple change.

It almost made an instant difference when Weimann's shot was deflected just wide of the post but with a switch in formation, Villa got a goal back after Bacuna's right-wing cross was headed back by Weimann and El Ahmadi volleyed in.

Agbonlahor - who, in addition to Weimann, returned from injury - gave the Villa side an injection of pace and put pressure on the West Brom defence.

And it was from his cross that Goran Popov's poor header landed on the edge of the box for Westwood to smash in 14 minutes from the end for his first Villa goal.

West Brom boss Steve Clarke: "When you are leading comfortably you feel you should get the three points but Villa made the changes and the energy seemed to unsettle us. We gave away a bad goal and that gave Villa the momentum and they took advantage.

"We missed one clear-cut chance to make it 3-0 and that would have been game over. We knew at half-time that the next game would be crucial and we had a similar situation last year when we were the team chasing the game. We wrestled control back at 2-2 and finished well.

"Shane Long's first goal is out of this world and he read the game well for the second. He's been on a good run of form for us and hopefully he can keep that going."

Villa manager Paul Lambert: "In the second half we were fantastic. We were really resolute after being two down after 11 minutes.

"We spoke about making changes at half-time but we decided to wait a bit, the three of them [Weimann, Agbonlahor and Delph] have been big players for us all season and they made a huge difference. They were only training on Friday.

"I thought Ashley Westwood took the game by the scruff of the neck. He is a fine passer of the ball and he can hit them as well. He was terrific for us."