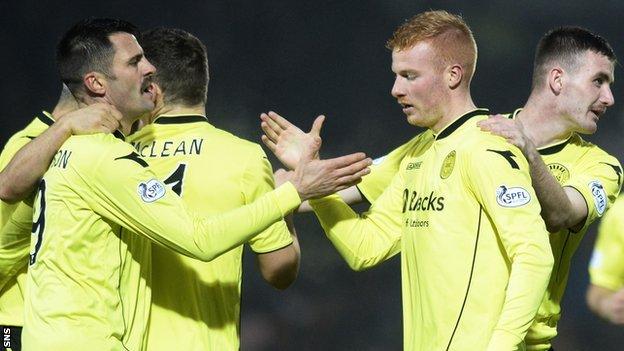 Ross County boss Derek Adams questioned why St Mirren captain Jim Goodwin stayed on the pitch during the Saints's 2-1 win against the Staggies on Sunday.

Steven Saunders scored for Ross after they fell 2-0 behind before he and team-mate Ivan Sproule were sent off.

"We had a stonewall penalty with a handball from Jim Goodwin," said Adams. "He seems to be immune from anything.

"There were two sendings-off and Goodwin probably committed the most fouls in the match of any player."

This was the second attempt at finishing the fixture after the original match was abandoned with St Mirren leading 2-0.

The Buddies restored their lead with goals either side of half-time from Kenny McLean and Conor Newton, but Saunders halved the deficit on the hour mark when the home side failed to clear former Saints midfielder Graham Carey's corner.

Any hope they had of grabbing a point was dealt a blow when Sproule was given a straight red card for a thigh-high challenge on Marc McAusland before Saunders's second booking in three minutes saw him also sent off.

I think any manager should concentrate on their own side, nothing more. If it is our turn to get that wee bit of luck then it is certainly overdue

"They were red cards," Adams admitted to BBC Scotland, adding: "If that's the letter of the law then you've got to do that over the piece."

The Highlanders were second best for much of the match but rallied late on, with referee Willie Collum ignoring claims for a penalty after Goodwin appeared to handle inside the box in the dying seconds.

Adams said: "I think a lot of people are flabbergasted to think a player can commit so many fouls and get away with it. It was a handball this week. It was a handball last week against Partick Thistle. I've not got blinkers on, it was plain to see."

He admitted St Mirren were the "better side" when both teams had their full complement of players but added: "When it was 11 against nine, we regrouped and found an extra bit of energy and we went forward and caused St Mirren problems.

"I feel in the end, when you look at it, we should have had a penalty and that would have given us the opportunity for a draw."

St Mirren manager Danny Lennon defended his captain and felt his side deserved any lucky breaks they received.

"Derek will have his own opinions, but I think any manager should concentrate on their own side, nothing more," he said. "Jim is a competitive player and that is his make-up.

"I have not seen it yet, but I am led to believe that it is a handball. If it is our turn to get that wee bit of luck then it is certainly overdue.

"It is part and parcel of the game, you get ones that go for you, ones that don't and that is the wee bit of luck that we had.

"You can talk about that, but I think, overall, with the amount of strikes we had on goal - between 18 and 20 - the disappointing thing was we didn't have any more goals for our efforts."