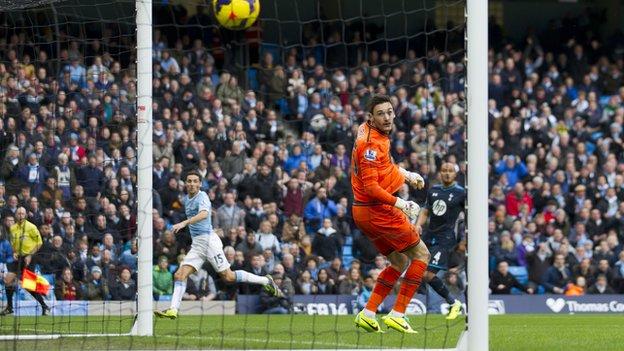 The hosts went ahead after 14 seconds when a poor Hugo Lloris clearance led to Jesus Navas brilliantly chipping in.

Alvaro Negredo's shot went in off Sandro and Sergio Aguero turned in a cross to put City 3-0 up at half-time.

Aguero again slotted in before Negredo's 18-yard strike and a side-footed Navas shot completed the rout.

City have struggled on their travels this season but at home they have been an irresistible force and they were once again in sublime form at Etihad Stadium, where they have a 100% record in the present campaign with six wins from as many games.

The movement and ruthlessness of Aguero, the invention of Samir Nasri, the midfield power of Yaya Toure and pace of Navas was too much for a shell-shocked Spurs as they suffered their biggest league defeat since losing 7-1 to Newcastle in December 1996.

The defeat left Tottenham with just one point from their last three top-flight outings and the drop in form has put them ninth in the Premier League.

Spurs had only conceded one league goal on the road this season - and six in total - but any hope they may have had before the game evaporated after just 14 seconds.

"Tottenham have taken a hammering from a Manchester City side who have achieved an emphatic win with an exhilarating performance. City have won six out of six in the Premier League this season and scored 26 goals in the process. They were brilliant from the start."

Lloris sent a clearance straight to Aguero and, even though the Tottenham keeper parried the Argentine's resulting 22-yard shot, he was beaten when Navas got to the loose ball ahead of Younes Kaboul and brilliantly scored with a first-time chip.

The visitors tried to respond and City centre-back Martin Demichelis cleared an Erik Lamela shot off his goal-line after keeper Costel Pantilimon had missed a low Kyle Walker cross.

However, that was as good as it got for Tottenham as City stunned their rivals.

Aguero latched on to a Nasri cross and, despite Lloris getting a hand to the striker's chipped shot, the ball fell to Negredo, whose shot rebounded off Kaboul and Sandro on the way into the net.

City right-back Pablo Zabaleta then released Navas on the right flank and the Spaniard's inviting low cross was expertly turned in from Aguero as the hosts all-but wrapped up the game before half-time.

Pellegrini's side continued to dominate after the break and Toure played a one-two with Negredo before surging into the Tottenham box and squaring for Aguero to slot in his 14th goal in 11 games for the club this season.

A Nasri effort came back off the crossbar before the quality of Negredo's finish for City's fifth then epitomised the home side's confidence.

The Spain forward produced a drag back from Fernandinho's through ball to leave defender Michael Dawson trailing before rifling a shot past Lloris from the edge of the box.

Pantilimon had to save an angled shot from recalled Spurs striker Emmanuel Adebayor but it was a rare chance for the visitors, whose misery was compounded when Navas raced clear and slotted in a sixth for City.

To see a photo gallery from the Manchester City v Spurs match go to the BBC Sport Facebook page.

Shots on Target
Home10
Away5