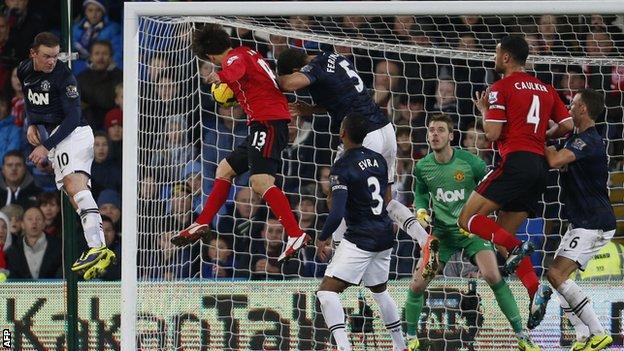 Wayne Rooney was at the centre of controversy when he received only a caution for kicking Jordon Mutch before scoring with a deflected strike.

Of Cardiff's Premier League goals this season, 45% have come at home to Manchester United and Manchester City

But Kim nodded past David De Gea to earn a dramatic late point.

It provided a thrilling finish to a high-quality match and prevented United from moving into the Premier League's top four.

The Red Devils have recovered from their worst start to a season in 24 years to go 10 games unbeaten in all competitions, but they will be bitterly disappointed with the manner of this result.

United could even have won the match after Kim's equaliser, but Rooney miscued a pass that would have given Danny Welbeck a tap-in.

Yet Cardiff were good value for the point and might feel aggrieved that Rooney was still on the pitch to have such an influence.

The Bluebirds have now marked their maiden Premier League campaign with home victories over Manchester City and Swansea, and a draw against reigning champions United.

It was a fitting way to mark the first top-flight meeting between these sides on Welsh soil since 1961 and their first of any kind in 38 years.

That made for a rousing pre-match atmosphere and Cardiff responded in kind, Campbell almost meeting a Mutch cross and Mutch seeing a glancing header from Peter Whittingham's free-kick well saved.

A pivotal moment arrived when Rooney was trying to get past Mutch and swiped out at him. Referee Neil Swarbrick produced a yellow card but replays suggested the striker was fortunate not to be sent off.

Mutch was excelling in the space between United's midfield and defence, and after collecting a Whittingham pass he produced a majestic through-ball for Campbell to slot past De Gea.

With the stadium now rocking and Cardiff in command, Campbell, Don Cowie and Whittingham drilled over - but joy turned to frustration on the stroke of half-time as Evra restored the lead from Rooney's corner.

The visitors started the second period as they finished the first, Marshall denying Fellaini and Chris Smalling from Rooney set-pieces.

However, Cardiff almost capitalised on a concentration lapse when Tom Cleverley inadvertently played in Campbell and his brilliant chip came back off the woodwork. Cleverley then almost nodded into his own net.

Ryan Giggs - 40 years old on 29 November - was introduced for a first appearance against his hometown club and that helped put United back in the ascendancy, fellow substitute Welbeck lashing over.

The miss proved costly as Kim arrived to convert Whittingham's free-kick in the closing minutes and prompt raucous celebrations.

Medel might have been shown a red card for appearing to slap Fellaini before the set-piece was delivered, while Rooney failed to find Welbeck to win it in the dying seconds as United were thwarted.