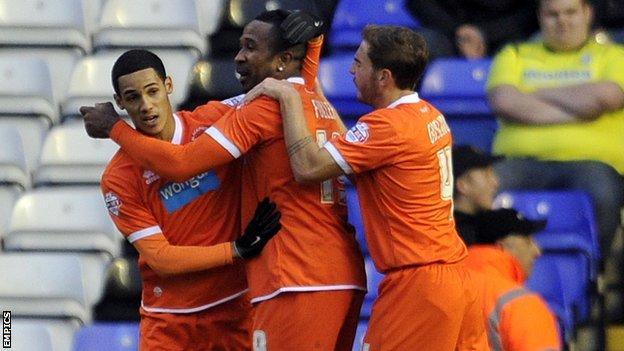 Ricardo Fuller's first-half equaliser was enough for Blackpool to take a point at Birmingham City.

Jesse Lingard gave the hosts the lead when he capitalised on Kirk Broadfoot's mistake to slot home.

But Tom Ince crossed for Fuller to level for the Seasiders.

Both teams had chances to win it after the break but Dan Burn cleared Ince's shot off the line before Tyler Blackett did the same for the visitors from a Lee Novak shot.

Manchester United loanee Lingard had seen a shot deflected wide of the post but scored the sixth goal of his spell with Blues after Broadfoot mis-controlled a Paul Caddis pass.

Lee Clark's side were in front for less than 10 minutes as Ince set up Fuller before the former Stoke man forced home keeper Darren Randolph into an excellent save before the break.

Birmingham introduced Polish international Dariusz Dudka early in the second half and he drew a good save from Matt Gilks as the hosts looked to secure a first home win since 1 October.

Neither side settled for the draw but good defending ensured the game ended level.

"We took the lead and then lost our concentration and gave the ball away cheaply. I thought that was the big factor and we struggled to get any forward momentum.

"We also lost possession far too easily and there is a lot of work to be done in this department.

"I cannot fault the players for their effort and application. They have fought, they have battled and taken on board the fact that, if you cannot win, do not lose the match."

"I thought we should have nicked the game and we dominated the game after the opening 25 minutes. They had a couple of chances at the death but I thought we were the team which looked most likely to get the winner.

"But give Birmingham credit - they were chasing the winner right until the final whistle."