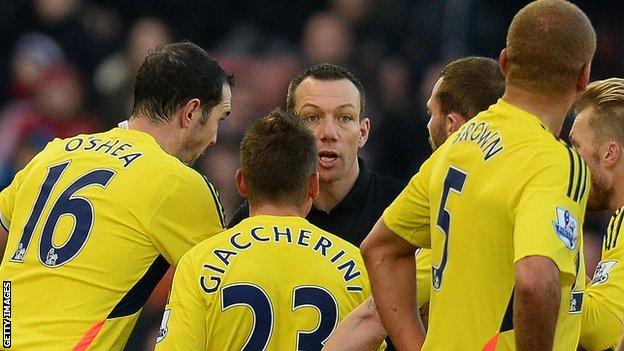 Charlie Adam slotted the hosts ahead after fine work from Steven Nzonzi.

But the Black Cats were furious about a 36th-minute red card shown to Wes Brown, who was sent off after flying into a challenge with Adam, though he appeared to win the ball cleanly.

Nzonzi sealed the victory with a cool finish after a swift breakaway.

The French midfielder's strike, after a fine Peter Crouch pass, settled both the match and Stoke's nerves at a tense Britannia Stadium and sent Sunderland to the bottom of the table following Crystal Palace's win over Hull City.

The Potters had created very few clear chances despite their numerical advantage, with the visitors' well-organised defence keeping them in the game until the final 10 minutes.

Fellow strugglers Sunderland also barely threatened, though their hopes of salvaging something from the game seemed slim from the moment Brown was sent off with them already trailing.

Until then, the Black Cats had looked neat, tidy and in confident mood on the back of their fine 1-0 win against Manchester City, twice going close.

Steven Fletcher almost scored with their first chance, but the sprawling figure of goalkeeper Asmir Begovic did well to divert the ball behind for a corner following Adam Johnson's clever long pass.

"It's a huge win for Stoke and just the third with Mark Hughes in charge, but the big talking point was the Wes Brown red card when it appeared he had got the ball.

"Sunderland stayed in the game and gave a valiant effort but were finally finished off."

And another long pass saw Ryan Shawcross forced to clear the ball off his own line after Robert Huth inadvertently turned it towards goal when Fletcher caused more confusion in the box.

But it was the hosts who broke the deadlock, Adam calmly stroking into the bottom corner after a patient move down the right ended with Nzonzi cutting the ball back to the Scot.

The game's main talking point came seven minutes later when former Manchester United defender Brown went robustly into a challenge with Adam near the halfway line and was sent off by referee Kevin Friend.

Brown looked flabbergasted and his manager Gus Poyet even more so, the Uruguayan ripping his coat off and flinging it to the ground as he struggled to contain his fury,

Sunderland regrouped and replaced Emanuele Giaccherini with Valentin Roberge to bolster their rearguard. That had the desired effect defensively but meant, apart from a Phil Bardsley strike and a Johnson shot that went just wide, they could not make headway in the final third.

The Black Cats did feel aggrieved they were not awarded a penalty, though, when Begovic raced from goal and won the ball with a raised boot that caught Fletcher in the follow through.

A penalty would have been incredibly harsh but Sunderland may argue the keeper's high foot was just as dangerous as the challenge that saw Brown dismissed.

With the visitors committing men forward in search of an equaliser, Stoke looked increasingly threatening on the break.

And they wrapped up the win - and moved three points of the relegation zone - when Adam and Crouch combined and the latter found Nzonzi, who neatly guided home a first-time finish.

"At the time I thought it was a poor challenge. Whether or not it merited a sending-off that is obviously the debate after the game, which is a shame because it takes the shine off our performance. We played really well today.

"I've looked at it myself on a laptop and I think from different angles it looks worse than from other angles.

"Obviously the referee, from his angle, felt it merited a sending-off and I can understand why that's the case. Charlie got caught on the outside of his legs about shin-level."