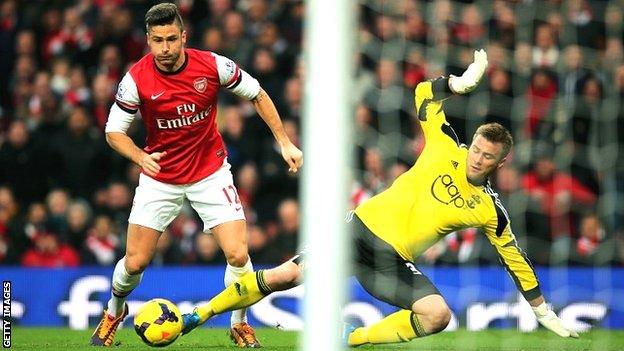 Olivier Giroud scored in either half as Arsenal edged past an impressive Southampton to move four points clear at the top of the Premier League.

Saints goalkeeper Artur Boruc gifted the hosts the lead, dwelling on a back-pass and allowing Giroud to tap in.

Jack Wilshere and Aaron Ramsey had hit the post, while Adam Lallana and Jay Rodriguez went close for the visitors.

Giroud sealed the win from the penalty spot after Jose Fonte was penalised for pulling Per Mertesacker's shirt.

It was not a vintage performance but the Gunners will be delighted to extend their advantage over second-placed Liverpool.

Southampton remain third following their best start to a top-flight season, but they will regret being undone by two mistakes.

Boruc's error was inexplicable and follows on from the bizarre goal he recently when Potters goalkeeper Asmir Begovic beat the Pole with an upfield clearance that bounced over his head.

But that aside, for a club on the brink of extinction following relegation to League One in 2009, Saints looked remarkably comfortable with their elevated status and caused Arsenal trouble throughout.

They were not helped by an illness to Dejan Lovren, which saw Jos Hooiveld come in for his first league start this season, and left their defence looking less solid than it has for most of the campaign.

Wilshere saw a chip hit the post and Ramsey was denied by the same piece of woodwork with an audacious flick from Mesut Ozil's cross.

The pressure was building but that could not legislate for Arsenal's opener; Boruc received Nathaniel Clyne's pass and tried to dribble past Giroud, only to be robbed of possession and Giroud tapped in.

It was harsh on Southampton and they worked hard to atone - Adam Lallana and Jay Rodriguez drawing fine saves from Wojciech Szczesny.

An injury to left-back Luke Shaw forced Mauricio Pochettino to reorganise his formation at half-time, but Saints remained in the ascendancy and Lallana again tested Szczesny's reactions.

However, Arsenal gradually regained the momentum and Boruc was alert to thwart Ozil and Wilshere before Theo Walcott was introduced as a substitute with 20 minutes left after two months out injured.

That offered the Gunners the sort of pace they had been missing and put Saints firmly on the back foot, leading to Arsenal's second goal.

Shortly after Walcott had drilled wide, Mertesacker was prevented from meeting a cross by Fonte's shirt pull and a penalty was awarded.

Giroud sent Boruc the wrong way to wrap up the points.