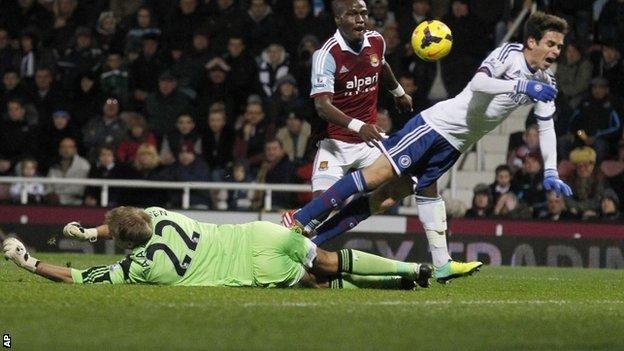 Frank Lampard scored twice against his former club as Chelsea moved up to third in the Premier League table with a convincing victory over West Ham.

Lampard put the Blues ahead from the penalty spot after Guy Demel's poor back-pass allowed Oscar to nip in, and he was felled by Jussi Jaaskelainen.

Oscar made it 2-0 when he drilled the ball home from the edge of the area.

West Ham improved after the break and Modibo Maiga went close, but Lampard sealed victory with a confident finish.

Chelsea had travelled across London having won only one of their five previous away league games this season but West Ham rarely looked like adding to the Blues' problems on the road.

The Hammers began the match with the same formation that served them so well in their 3-0 win against Tottenham last month - playing without a recognised striker, they pushed Kevin Nolan furthest forward and tried to get players up to support him.

This time, it was nowhere near as successful. Stewart Downing did deliver some dangerous crosses from the left but, otherwise, the home side's attacking threat was non-existent.

West Ham's defending hardly helped their cause either. Demel's woeful attempt to find Jaaskelainen with his thigh back-fired and, once Lampard had fired home the resulting penalty, the Blues did not look back.

The passing and movement of Oscar and Eden Hazard was too quick and too slick for the Hammers and, when Chelsea's second goal arrived after 34 minutes, it was all too easy.

Lampard back on target again

This was the third game in a row that Frank Lampard had scored against his former club West Ham, and ended his run of 10 Premier League matches without a goal, his longest since joining Chelsea from the Hammers in 2001.

James Collins rashly dashed in to challenge Hazard and try to stop a long series of passes, but left a big gap behind him. Hazard's flick found Oscar who advanced unchallenged to the edge of the area and fizzed a low shot into the bottom corner.

Five minutes before half-time, Hammers boss Sam Allardyce had seen enough and made a double switch, introducing Maiga to belatedly offer a permanent presence up front and Mohamed Diame to plug the gaps that Jose Mourinho's men were exploiting in midfield.

West Ham did, at least, make more of a game of it in the second half although, if Mark Noble had not cleared Gary Cahill's header off the line, Chelsea would have been out of sight by the 53rd minute. Instead, the Hammers retained faint hope.

They should have pulled a goal back when Demel's extraordinarily mazy run took him past three defenders but Maiga wastefully fired wide after meeting his cross at the far post.

If that chance, after 65 minutes, had been converted then Chelsea might have faced an anxious finish to the game.

Instead, they were relatively untroubled as they saw out their win, seemingly happy to concede territory and possession to their hosts while remaining dangerous on the break.

Lampard's second goal of the evening arrived through that avenue after 82 minutes and made sure the three points would be theirs.

Hazard saw his shot blocked from Branislav Ivanovic's cross but the ball fell to Lampard to sweep it home from the edge of the area.

After that, the only question left was the margin of Chelsea's victory and another former Hammer, Demba Ba, had a late strike ruled out for a marginal offside.

West Ham took until the 93rd minute to register an effort on target, when Joey O'Brien's header at last brought a save out of Petr Cech.

Chelsea manager Jose Mourinho: "Our second half against Tottenham was also brilliant, but today was a 90-minute performance. We looked very solid from the first minute.

"The points are important, and the way we played. We are right in there, we are not leaders, but we are right behind.

"For me, everybody did a fantastic job for me. The team was really good."

West Ham boss Sam Allardyce: "If you make the sort of mistakes that we made against a team like Chelsea, then we can only expect to lose. We made too many big mistakes and gifted them the first goal.

"If that had gone in, it might have lifted the crowd and we might have got something out of the game, but for us it was a disappointing afternoon."

Shots on Target
Home1
Away8