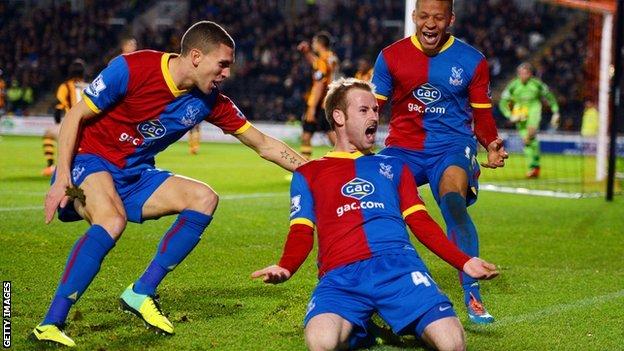 Ten-man Crystal Palace beat Hull to record their second win of the season.

New Palace boss Tony Pulis signed a two-and-a-half-year deal earlier on Saturday but caretaker Keith Millen took charge for a final time as the Welshman watched from the stands.

Yannick Sagbo missed a good chance to put the hosts ahead before Yannick Bolasie saw red for a foul on Jake Livermore with 12 minutes left.

Bannan's goal, Palace's first since the 4-1 home defeat by Fulham on 21 October, came after great work from sub Cameron Jerome, who showed quick feet and strength to get past Tigers defender Maynor Figueroa before cutting back for the Scot.

Steve Bruce's side had only conceded once in a five-game unbeaten home run going into the match, while Palace had lost their previous five away from Selhurst Park.

There was an early hold up after a clash of heads between Hull defender Paul McShane and Palace striker Marouane Chamakh, the latter eventually being replaced by Jerome.

The best chance of the opening exchanges fell to Bolasie, but the former Plymouth man fired wastefully high and wide after good build-up play.

The scrappy tone continued throughout the first half and it took until the 40th minute for either keeper to be forced into action - Eagles keeper Julian Speroni saving easily from George Boyd's deflected effort.

This was the first match to be played at the KC Stadium since owner Assem Allam reaffirmed his intention to rename the club Hull Tigers and midway through the first period a group of Hull fans unfurled a banner reading 'We are Hull City'.

Speroni was sharply off his line to deny Sagbo after Boyd had poked through for the Frenchman at the start of the second period.

New Palace boss Pulis has never been relegated in 21 years as a manager.

Davies missed a chance to open the scoring when he got the ball caught between his feet after it had broken to him in the box from a Boyd corner and Palace were able to clear.

Bolasie's day came to a premature end when he was shown a straight red card after a badly-timed challenge on Livermore on the edge of the Hull area but his dismissal proved to be the catalyst for the strugglers as Bannan slotted home the winner just two minutes later.

The Tigers pressed in search of an equaliser and Tom Huddlestone went close before full-back Liam Rosenior nearly scored a dramatic equaliser in stoppage time only for his 18-yard volley to hit the post with Speroni well beaten.

Victory for Palace means they move off the bottom of the Premier League while Hull dropped to 13th.

"We're disappointed in the way we played. We just didn't create enough. The longer it went on you could see they were getting more confident.

"It's difficult at our level to find someone who can score the goals you need but we have to get back to finding a way to get results.

"Keith deserves huge credit for how well he's done with them."

"I'm so proud of the players. There is a belief there and they are working so hard for one another.

"I'd love to stay here, hopefully I'll be in Tony Pulis's plans. I'm sure we'll sit down together and have a lot of discussions about a lot of things over the next few days.

"I've seen the red card and I think it's harsh. He slips into the challenge."