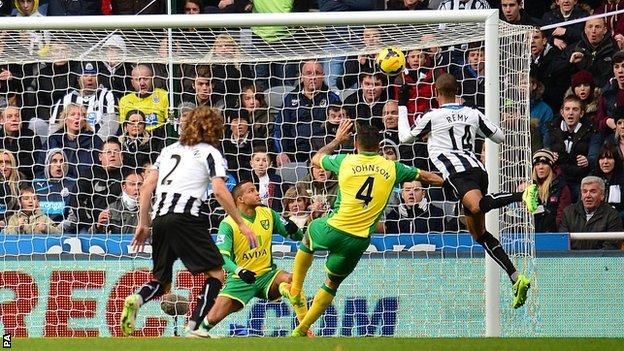 The Magpies made the most of poor defending to take the lead when Loic Remy headed in Yohan Cabaye's corner at the far post after two minutes.

Yoan Gouffran pounced to stab in a second after Shola Ameobi's header had been parried by keeper John Ruddy.

Leroy Fer scored a powerful late header for Norwich to give them hope but Newcastle held on for the three points.

Newcastle had registered hard-fought wins against Chelsea and Tottenham in their last two games but the win over Norwich proved more of a routine victory.

Hughton has now lost twice and drawn once against the Magpies, who he managed between June 2009 and December 2010, in the three matches he has faced them since taking over as Canaries boss.

His side's latest defeat again puts him under pressure and once more highlighted his side's defensive problems as they quickly went behind.

Norwich's players stood and watched as a corner bounced across their goalmouth before the ball reached the far post where Remy nodded in for his eighth goal in as many games.

The visitors responded with a brief spell of pressure during which Nathan Redmond latched on to a lofted through ball but sent his angled 15-yard shot well over.

"I'm afraid for Chris Hughton his return to Newcastle again ends in defeat. The Magpies won it in the first half with goals from Loic Remy and Yoan Gouffran. You have to give Norwich credit for a spirited second half but Newcastle are on a pretty good run at the moment."

Winger Redmond set up another Canaries chance when he crossed to the far post for Anthony Pilkington, but his looping header went across the goalmouth before being scrambled clear.

However, Newcastle quickly reasserted their authority and extended their lead.

Ameobi's powerful downward header from Moussa Sissoko's inviting cross was only parried by Ruddy and Gouffran reacted quickest to score from point-blank range.

It was the 23rd top-flight goal the Canaries have conceded so far this season, the second most in the Premier League behind bottom side Sunderland.

Ameobi was a constant threat to Norwich and he went close with a well-struck 20-yard shot which Ruddy palmed wide.

Newcastle were in firm control for most of the match as they repelled the visitors' efforts but they started to relax in the latter stages and allowed Norwich to pull a goal back.

Fer out-jumped centre-back Fabricio Coloccini to head in off the post but Norwich could not build on the goal and have now won just three out of 25 away league games during Hughton's tenure.

"I thought we looked a little tired in the second half. Norwich had a good second half but I felt we were in control of the game.

"That is a third win on the trot and a big, big win. This was as important as beating Chelsea and Spurs.

"We are looking really solid and and have good influence off the bench. We are in good shape. We deserved to win."

"It was not so much the performance [that was frustrating] but goals we conceded. They were two goals that were avoidable.

"Credit to the players as they came out and showed spirit and character [in the second half].

"At the moment we need to be scoring more goals. We pushed really hard in the second half but goals decide games and if we are conceding soft goals we make it difficult for ourselves."