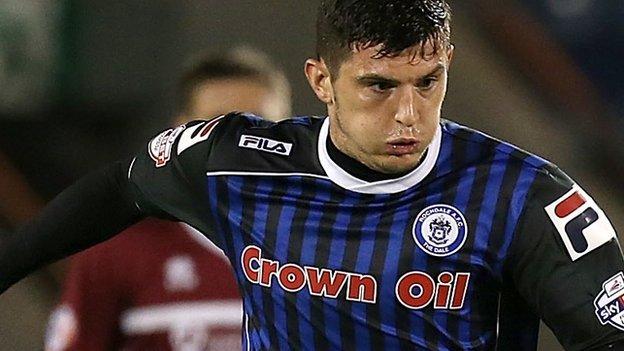 Rochdale remained in third place in League Two after a hard-fought win over mid-table Exeter City.

Michael Rose fired the hosts into the lead with a curled left-footed free-kick which crept inside the near post.

Exeter equalised when John O'Flynn's cross found Alan Gow 10 yards out and he coolly finished with his left foot.

Graham Cummins nodded in a deep Matthew Lund cross to restore the lead before Andrew Tutte turned into space and fired home a right-footed strike.

"We were reasonably comfortable. I thought it was a good, technical game. We just edged it.

"I've got a lot of respect for (Exeter manager) Paul Tisdale, the way he sets up and the way he wants to play.

"It was a very open game, without too many goalscoring opportunities, but I do believe we deserved it."