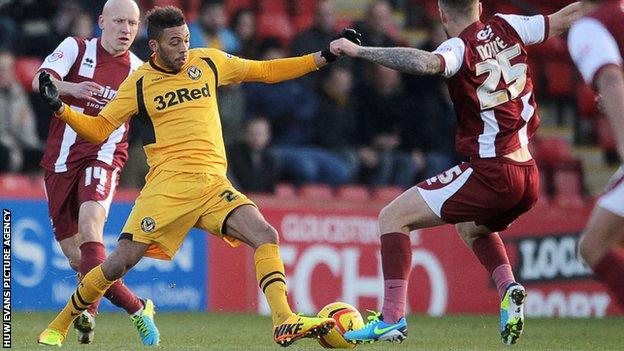 Newport County maintained their place in the League Two play-off places after surviving a late onslaught at Cheltenham.

Home striker Jamie Cureton had an effort saved by County goalkeeper Lenny Pidgeley and then headed wide in the final 10 minutes.

Conor Washington hit a post for Newport before the interval, who are now gone five games unbeaten.

The Robins have yet to win two consecutive matches in the League.

"We couldn't quite find the killer touch, we couldn't find our enterprise in that final third - we had lots of half chances but didn't work the keeper enough.

"We've kept a clean sheet and gone five games unbeaten, so we'll just have to roll into Tuesday and improve on the things we did today.

"Clean sheets and unbeaten runs are important for confidence. I think we needed a bit more creativity today but apart from that I think it was a decent game of football."

"We hit a post and had one cleared off the line, on another day we may have come away with all three points.

"I thought we did control the first half, I thought we just didn't have good execution in the final third.

"That's four clean sheets on the spin now and with our own form if we can keep doing that away from home we're going to be there or thereabout."