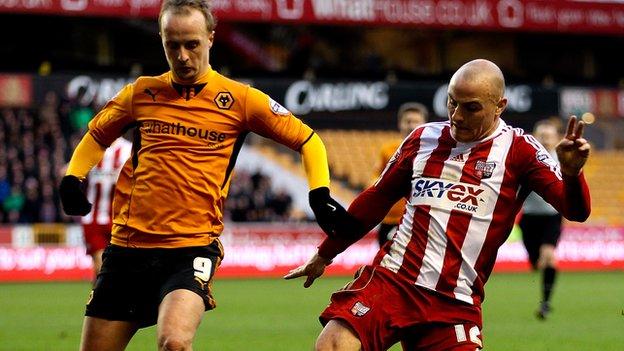 Wolves were knocked off top spot in League One after being held by promotion rivals Brentford at Molineux.

Wolves' 11-goal top scorer Leigh Griffiths was closest to breaking the deadlock when he lashed a fierce 11th-minute shot against the foot of a post.

But Adam Forshaw blazed over from six yards before home keeper Carl Ikeme's fine save from Clayton Donaldson.

But Wolves' first goalless draw since the first day of the season saw them overtaken again by Leyton Orient.

It also ended a six-match winning run for Uwe Rosler's Bees, who had scored 10 in their previous two league and cup games.

Brentford made a late push to snatch the points but they remain in fourth, as Toumani Diagouraga and Alan McCormack could not find a way past the assured Ikeme.

"It is fantastic to see how many people now follow us away from home, and really believe that we can do something at Wolves, players, very proud of them.

"I think the first 10-15 minutes the tempo took us a little bit, they had a better momentum. We kept on being offensive and kept the pressure high, we had probably the better chances in the first half apart from the post from Griffiths.

"Second half we went a little bit more compact, didn't pressure as high as we did in the first half, and they were running out of ideas, we had one or two good chances in the end."