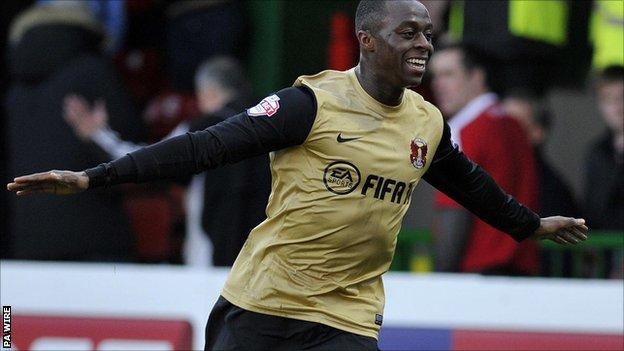 Moses Odubajo scored twice as Leyton Orient won at Swindon to return to the summit of League One.

Town led through Nicky Ajose's shot from inside the box before David Mooney equalised straight from the restart, lobbing Swindon keeper Wes Foderingham.

Odubajo then converted Dean Cox's cross before the break and added his side's third immediately after the interval, thanks to a wicked deflection.

Late on, Swindon had defender Jay McEveley sent off for upending Odubajo.

"We scored a goal and then conceded straight from the kick-off and that really put us on the back foot.

"We didn't defend well as a team. We keep working and working at it but we keep conceding goals.

"Something has to change because it is costing us.

"We didn't play particularly well in an attacking sense either - Orient didn't have to do a lot to beat us."

"It's a great win but it was clouded in my opinion really by the fan coming on the pitch and throwing three punches at my goalkeeper. I mean that's absolutely outrageous, that's the worst scene I've seen since I've been a manager at my football club, that's an unbelievable scene.

"He's okay, but I mean it doesn't make it right does it, that he's okay? I mean, it's outrageous. The supporter, he needs a ban for life, he should never go to another football match."

"We were too positive to be doubtful, and too determined to be defeated for the entire game. We go a goal down but it doesn't affect us, we just play the way we play and if we can create chances like we have today then we're going to score goals."