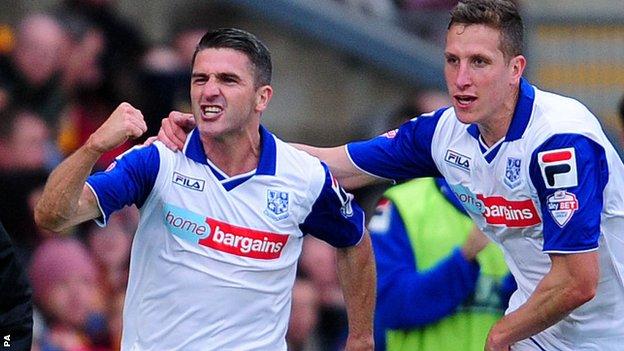 Ryan Lowe's hat-trick lifted Tranmere out of the bottom four and put an end to Coventry's seven-match unbeaten run.

He struck first from Jason Koumas' pass and Owain Fon Williams kept them in front by twice denying Callum Wilson.

Jake Kirby doubled the lead and Lowe chipped the third before punishing Joe Murphy's misplaced kick for his third.

Carl Baker pulled one back after a handball in the box before Tranmere's Ash Taylor was sent off for a foul, but sub James Wallace added a late fifth.

The goal, fired home from outside the box two minutes from time, secured Tranmere's third away victory of a season in which they have only won once in front of their home fans and was a tremendous filip for midfielder Wallace, who was making his first appearance since suffering a knee injury almost a year ago.

However, it was overshadowed by the third hat-trick of 35-year-old Lowe's career, in which he has scored over 170 goals for eight different clubs - and he completed it in style by lobbing home from 35 yards after controlling Murphy's clearance.

He was replaced by Akpo Sodje shortly before Wallace's strike, but had already done enough to inflict Coventry's second league defeat at their adopted Northampton home, and Fon Williams prevented a second consolation in the final moments with a good save to deny Baker.

"The result's not good enough, but I don't want to be overly critical because we've come so far in such a short distance.

"I know how hard our players have worked in that period, and maybe it has caught up with them.

"We got what we deserved today, and I've got no complaints about that. I'll go away and analyse my performance to see what I can do better, and I hope my players do too.

"They understand the standards and I don't need to remind them of those. Setbacks are part of football and are a test of character."