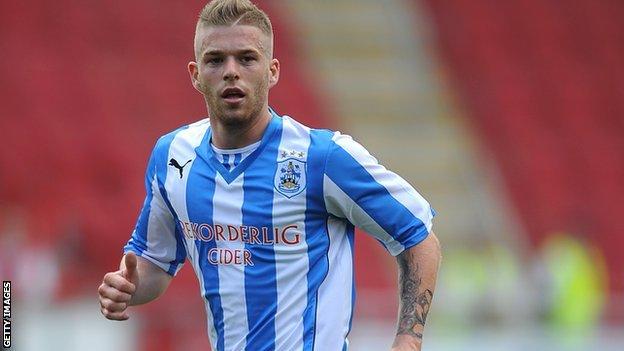 Martin Paterson gave the visitors the lead when he slotted home from Adam Clayton's neat through-ball.

Clayton made it 2-0 with a low shot from the edge of the area after the ball had rebounded into his path.

The Owls pushed late on but Connor Wickham's injury-time free-kick came too late to change matters.

The game was a match-up between two of the division's most out-of-form teams, with the hosts having recorded just one win all season while the visitors had been victorious in one of their last eight matches.

Mark Robins' side went in front inside the opening 10 minutes. Clayton showed tidy control before slipping the ball through to Paterson and, despite the Northern Ireland international appearing to be marginally offside, the flag stayed down to allow him to score his first of the season.

Wednesday had scored five goals in their last home outing but struggled to keep up with the early pace being set by the visiting side.

With the Owls looking disjointed, Huddersfield midfielder Oliver Norwood forced debutant keeper Damian Martinez into a low save from 30 yards as they looked to add to their lead before half-time.

It came as little surprise that Dave Jones made changes at the break, as Jermaine Johnson and Giles Coke were sent on for the ineffectual Michail Antonio and the booked Stephen McPhail.

However less than a minute into the second period it should have been 2-0, when Paul Dixon's shot was deflected into the path of James Vaughan six yards from goal - but the former Everton man sliced wide.

Just as the hosts had started to exert some pressure on the Town goal they found themselves two behind. Huddersfield worked a corner back to Norwood to strike and, after his shot was blocked, Clayton made no mistake with a low half-volley.

The Owls pushed late on and at least had something to show for their efforts when Wickham's low free-kick found the back of the net in injury time.

Victory moves the Terriers up to 13th in the table while Wednesday remain three points off safety.

"It's part and parcel of being a football manager - if you're not doing well people always think change is for the best.

"You've got to be prepared and ready for those questions. You reporters have a job to do, but I look at it in a positive way.

"There have been so many managers here - when do you stop?

"There is no magic formula other than hard work and me and my staff work and work because we want to get it right."

(On Paterson and Clayton who returned to the team after being banned for a training ground altercation) "I do things a certain way, but by no stretch of the imagination can we afford to leave our better players out for long periods, but they've got to tow the line.

"Paterson is a top player. It's taken him a little bit of time to settle down for whatever reason, but if he performs like that he will be a handful in the Championship."