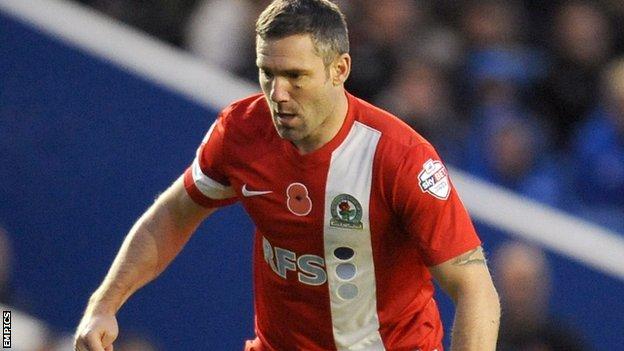 Blackburn and Reading played out a stalemate that saw the Royals drop out of the Championship play-off places.

The Royals felt they should have had a penalty when Chris Gunter went down under the challenge of Grant Hanley in the area but he was booked for diving.

Kaspars Gorkss headed over for Reading from close range as it ended level.

Rovers, who were looking to bounce back from a 3-0 defeat by Brighton in their last game, recalled veteran Dunn and his effort flicked off Gorkss before coming back off the woodwork.

McCarthy stopped Cairney scoring with a fine fingertip save before Pavel Pogrebnyak headed wide for Reading.

Nigel Adkins was furious when his side were not awarded a penalty at the start of the second period and his mood would not have improved when Pogrebnyak fired wastefully over when well placed.

Cairney went close with a free-kick and Gorkss should have won it after a corner fell to him three yards out.

"I thought the first-half display was very dominant, we were totally in control and their goalkeeper has pulled out an unbelievable save. David Dunn hit the post, Tom Cairney danced through and shot straight at the goalkeeper. I was delighted with our display.

"Reading changed formation to try and get into the game then made a double substitution at half-time so that was enormous credit to how we were in the first half.

"I thought it was a very tough second half for both teams. The standard of football at times was very good."

"It was a penalty. It was an obvious decision but I can't control it. It's that obvious for everybody, I don't need to say anything.

"The referee gives the decision and you've got to get on with it. The frustrating thing is we've got a player in Chris Gunter who's as honest as the day is long and he's got a booking which is totally wrong.

"We can't appeal it, can't get it rescinded and it could affect us later on in the season.

"He's picked up a card now that will go against his name and reputation and it's totally wrong."