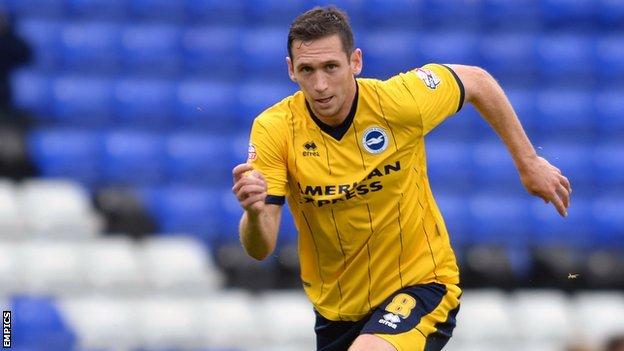 Andrew Crofts secured Brighton's third Championship victory on the trot with his winner against Wigan Athletic.

Latics goalkeeper Lee Nicholls had made an excellent save from Jake Forster-Caskey's header to deny the visitors.

But he was beaten when Crofts scored his fifth goal of the season with a looping 72nd-minute header.

Wigan went close to a 90th-minute equaliser but Brighton keeper Tomasz Kuszczak kept out striker Grant Holt's header with a diving save.

The Latics had been unbeaten at home in all competitions but Brighton's win ended that run.

Wigan had the first sight of goal through Leon Barnett, who met Ben Watson's sixth-minute corner at the near post but drilled his shot well wide.

Watson was then unlucky not to give the FA Cup holders an 11th-minute lead when he blasted just wide after a neat one-two with Marc-Antoine Fortune.

After the break, Ashley Barnes crossed from the left for an unmarked Forster-Caskey, who headed straight at Latics keeper Lee Nicholls.

Holt then failed to capitalise on a one-on-one with Kuszczak shortly before Crofts put Brighton in front.

Craig Conway nearly doubled the visitors' advantage after cutting inside and unleashing a stinging shot at Nicholls, who parried the effort wide.

Kuszczak then saved from Holt to ensure the Seagulls remain unbeaten on the road since September.

"There's a bit of anger because we'd been unbeaten here and wanted that to continue. You can feel sorry for yourself or bounce back quickly, and that's what we'll do.

"We have to be ruthless and more clinical. We will continue to try and add to the striking department.

"Grant Holt doesn't lack confidence, he's a great lad. He's an outstanding player and will score many goals for Wigan."

"I am very pleased and proud of my players because all of them gave 100% and if you don't work hard it's impossible to win here.

"I'm pleased because no other team has won here and to be the first to do it means a lot to us.

"We had some good chances to score and they had one or two but we took our chance and it made the difference."