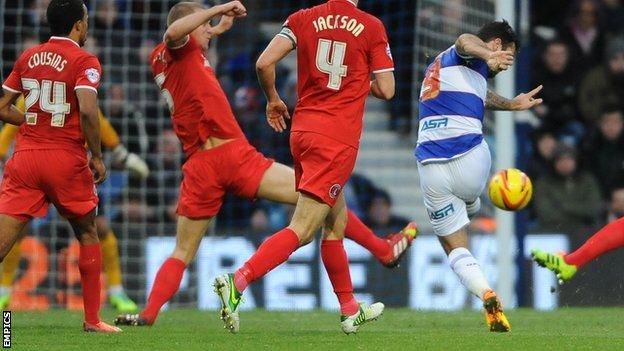 Striker Austin struck five minutes before half-time, finding the corner of the net with a 30-yard shot for his eighth goal of the season.

QPR were denied a second when substitute Shaun Wright-Phillips hit the woodwork in the final seconds.

The Hoops remain third despite the win but are level on points with leaders Burnley and second-placed Leicester.

Defeat leaves Charlton just one place above the relegation zone.

With the Hoops continuing to dominate possession after the break, Charlton keeper Ben Hamer tipped away a free-kick from Joey Barton.

And he was also down quickly to stop Wright-Phillips's attempt from just outside the penalty area as Chris Powell's visitors were forced to defend in numbers.

Wright-Phillips then created room for himself on the edge of the box before curling in a shot, which beat Hamer but came back off the crossbar.

"It was tight today and it didn't need to be.

"We could have scored more goals and we hit the bar, but we'll happily take that and it's another clean sheet for us.

"It was a great goal from Charlie and he deserved that, because when he's not scored he's worked really hard and I think the fans appreciate that."

"We were beaten by a wonder strike - an excellent goal.

"We acquitted ourselves well but lacked belief in the final third. We defended really well but certain things didn't go our way and that's hard to take.

"I've got to do my best to instil some confidence in the players. They know what they're up against but they're in the same league and I feel can play against these guys."