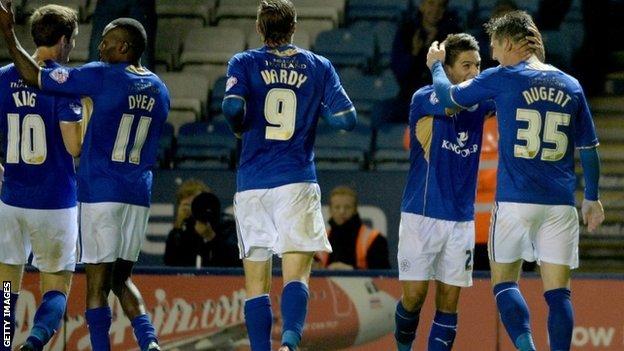 David Nugent scored twice on his 100th appearance for Leicester City as they came from behind to beat Ipswich Town and stay second in the Championship.

Nugent finished crisply to cancel out David McGoldrick's early long-range strike for the home side.

And his second, six minutes later, his 13th in 12 appearances against Ipswich, proved enough to take all three points.

Leicester are level on points with leaders Burnley, who drew at Nottingham Forest, and third-placed QPR.

After beating Blackpool in their last game, Ipswich took an early lead against another high-flying team as McGoldrick's 25-yard strike, his seventh goal of the season, broke the deadlock.

Nugent fizzed an effort wide at the other end, before McGoldrick was denied a second by a smart Kasper Schmeichel save.

Leicester went close to levelling late in the half when Andy King met Danny Drinkwater's corner, forcing Dean Gerken to tip over.

But the Ipswich goalkeeper could do little to thwart Nugent after the restart.

Lloyd Dyer's run and cross was met by Jamie Vardy, who teed up Nugent for the leveller, before good work by Drinkwater provided the former England international with an open goal for his second.

Ipswich have the best points haul from losing positions in the Championship this season and threatened when Luke Chambers headed wide, but they could not create a clear chance late on.

Nugent missed an opportunity to complete a hat-trick when heading wide at the far post, but Leicester held on to secure a 14th win in 19 matches.

"There are not many players in this league who would have struck that equaliser like David Nugent did.

"We made error after error and we were punished. That's the difference in this league when you play one of the best."

"Like any striker, there are going to be spells when goals are a little scarce. David has to keep getting in the right areas, and he scored two good goals.

"He also needs a manager to back him, which he has.

"David will get all the headlines but Lloyd Dyer and Danny Drinkwater did exceptionally well. The most important thing is that we got all three points."