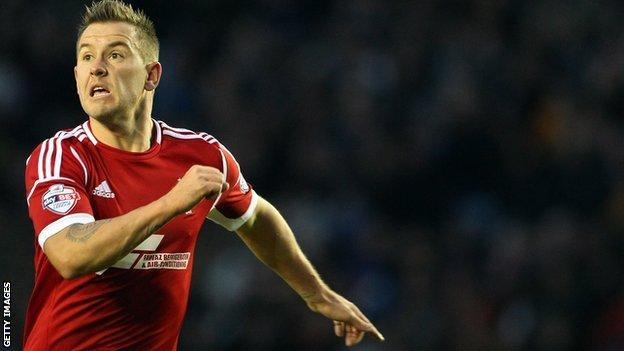 The Clarets, who top the table on goal difference, led slightly against the run of play when Sam Vokes scored a 28th-minute penalty after Gonzalo Jara handled Kieran Trippier's cross.

Both sides threatened after half-time but neither could find a breakthrough.

The draw ensures Forest remain in fifth place, while the visitors - who were joined on 35 points by Leicester and QPR - stretch their unbeaten run to 12 games.

Forest looked the more likely winners after a bright start in a lively game at the City Ground.

However their good work was undone when Jara dangled an arm in front of Trippier's cross and Vokes thumped home his 10th goal of the season.

The hosts responded well and Henri Lansbury almost grabbed a swift leveller, but his curling free-kick came back off the bar.

Burnley have now gone 12 games unbeaten and are one of only two teams in the Championship who have lost just one league game this season. QPR's 1-0 win over Charlton means they have matched Burnley's record.

Cox then squandered a good opportunity, flicking a header over the bar following an impressive run and cross from the left by skipper Chris Cohen.

The Republic of Ireland striker was also denied by Tom Heaton with another effort before he did find the equaliser.

Paterson worked himself some space out wide and his inviting chipped cross left Cox with a simple far-post header.

A defensive mix-up between Jack Hobbs and Cohen after the break almost gifted the away side a second goal but a lunging block from Nathaniel Chalobah denied Scott Arfield.

Radoslaw Majewski went close for Forest in the closing stages, while Danny Ings and Arfield did likewise for the Clarets.

But the most significant moment of an entertaining finale came when Cohen, who was making his 250th start for the Reds, limped off injured.

"It is a travesty that we did not get three points. There was only one team that was going to win this game.

"I was delighted with the performance. We played against the top of the league side and we had total dominance, nullifying them, barring five minutes. We deserved a lot more than we got. I am very proud of the players.

"I was pleased with the manner in which we went about our business, with the football we played, with the dominance we had. There have been many games where we have deserved more than we have got and this one was another.

"We lost some key players. We lost Eric Lichaj to an injury at half-time and Chris Cohen late in the game. He has a knee problem, in the same knee he has had issues with previously, we will find out how bad it is (on Sunday)."

"We picked up a point at Nottingham Forest and we are top of the league and it is hard to be disappointed - but I like the fact that there was a little disappointment after this.

"There is no lack of effort, we just lacked a little quality on the ball. We have not had to defend that hard very often, but you expect that here. They have overwhelming resources. Still, they did not manage to break us down too often. This is a tough place to come.

"We have 20-something players who are working hard for the cause. Billy Davies has spoken about his injuries. I think he was down to 32 players."