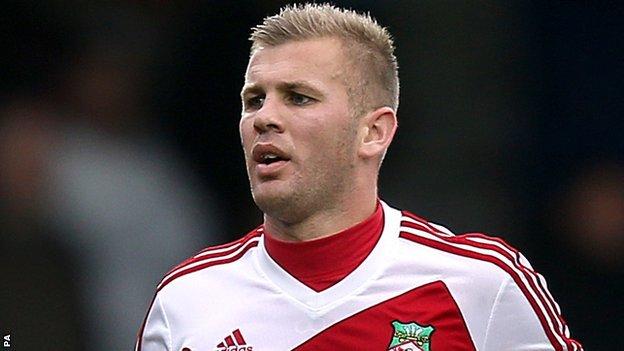 Wrexham striker Andy Bishop was delighted with his hat-trick in the win over Gateshead after what he admits has been a tough start to the season.

The 31-year-old's hat-trick was his fifth goal in two games after a brace in the FA Cup win over Alfreton Town.

If we're winning I don't mind who's scoring because that's been the good thing when I haven't been scoring, other lads have been chipping i

Bishop had only previously scored two goals this season prior to last Saturday.

"It's been a bit of a tough start for me. I've not scored as many as I'd have liked," Bishop said.

"I've confidence in my ability scoring goals. I've done it all my career and just needed that one to get me up and running.

The former Bury player put Wrexham ahead against Gateshead in the Conference Premier when he turned in David Artell's flick-on.

But two goals in a minute from James Marwood and Adam Boyes gave Gateshead the lead.

Bishop levelled from the penalty spot before completing his hat-trick with a stoppage time header which secured a dramatic victory.

"It's a massive win because we've had a stop-start [season]," Bishop added.

"We've got to get that run going and get a bit more consistency and this could kick-start it.

"If we're winning I don't mind who's scoring because that's been the good thing when I haven't been scoring, other lads have been chipping in."

Wrexham are 16th in the Conference Premier following victory over Gateshead and travel to third-placed Kidderminster on Saturday.