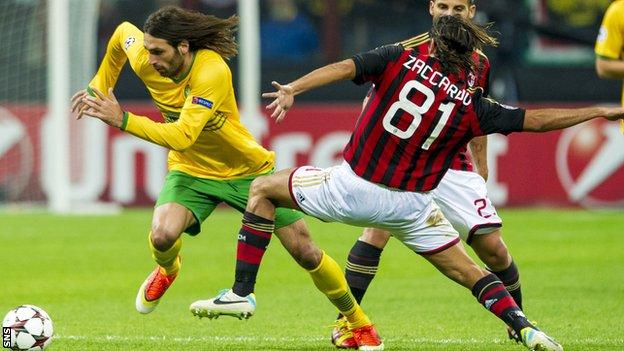 Ten minutes from time at the San Siro in September it would have been hard to believe that Celtic would go into the return match against Milan with only three Champions League points on the board.

In fact, even after the Scottish champions had conceded those two late and scrappy goals, the overall performance seemed more significant than the result.

It was an impressive display from Neil Lennon's team; they'd grown in stature and played with the belief which comes from having reached the last 16 of Europe's top club tournament last season.

And, despite returning from Italy pointless, Celtic looked to have laid the foundations for another successful European campaign.

A third-place finish in the group would mean Europa League football for Celtic. After last season's heroics in the main event, no-one's interested in settling for that.

Maybe that's the way this Group H campaign will still pan out but what Celtic don't have any more is margin for error.

Not having lost three of their four games with the final one to be played out in the scary surroundings of the Nou Camp. Celtic were, of course, brilliant in Barcelona a year ago, only losing out in stoppage time right at the end of the match.

And a fortnight later they beat the Spanish superstars at Celtic Park - one of the biggest results in the club's history.

It's just that - even allowing for those happy memories of last season - Celtic wouldn't want to be banking on the Barcelona trip to supply the point or points required for an extension to their Champions League adventure.

That's why getting all three from the home game against Milan is essential, and surely well within Celtic's grasp, especially in the guaranteed spine-tingling atmosphere.

The absence of Scott Brown is a minus. The return to match sharpness of Kris Commons is a big plus. He was worth a gamble in Amsterdam, but was nowhere near ready.

Celtic's major creative influence will be ready for this one, and they're certainly due a big performance from Georgios Samaras who ran up too many blind alleys in that disappointing defeat by Ajax.

There's no point in pining for the predatory prowess of Gary Hooper. He's history now since being sold to Norwich but his name does come screaming to mind when you consider Celtic have scored in only one of their four Champions League group games so far.

Defensively, Celtic are a tighter unit than they were. Fraser Forster is a superb shot-stopper and Virgil van Dijk has helped to transform the back four into much more comfortable viewing.

But the pressure on the defence intensifies if the goals aren't going in at the other end.

Maybe Celtic should have used the money they invested in those three on one serious signing - one who can guarantee big goals in big games.

Anthony Stokes can do that in domestic football, but it's at top European level where he falls short.

Anyway, that's a debate for another time. Celtic should still have enough in their armoury, including their high-volume vocal backing, to get the win they so badly want.

A third-place finish in the group would mean Europa League football for Celtic.

After last season's heroics in the main event, no-one's interested in settling for that.