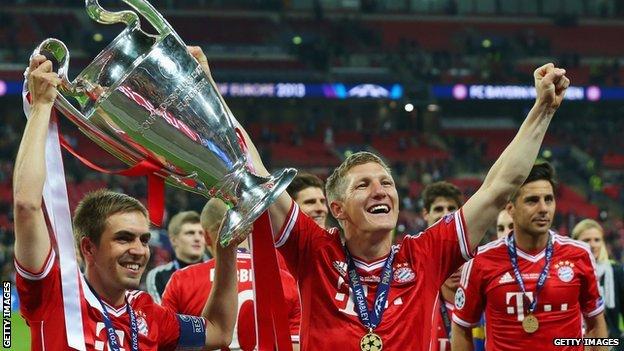 The broadcaster has won the rights to show all 350 fixtures each season from 2015 after talks with European governing body Uefa.

A BT spokesman said it had "shaken up the UK TV market" and would make some matches, including finals, free to air.

The news is a major blow to Sky and ITV, which currently share the rights.

While BT said it was the first time a single UK broadcaster had won the exclusive live rights to all matches from the two tournaments, Sky said the deal was "far in excess" of its own valuation.

"I am thrilled that BT Sport will be the only place where fans can enjoy all the live action from the Champions League and Europa League," said BT chief executive Gavin Patterson.

ITV has been the free-to-air broadcaster of the Champions Leage since it launched in 1992.

"We were not prepared to pay over the odds in the latest live rights round," read an ITV statement.

"Viewers will be able to continue to watch both competitions free on ITV through to 2015 and we remain the home of live England football."

The new contract, priced at £299m a season, is worth more than double the current arrangement, which could mean significantly more money for clubs in the two European competitions.

Each of the 32 teams in the group phase of the Champions League currently receive a participation payment of around £7m and £396,000 for every match played in the group stages. The winners get more than £30m in total.

As part of the deal, BT has said it will show at least one match involving each participating British team for free every season.

"We are new to the market. The key for us is growing our broadband business. We are available on all platforms. If customers do not want to be BT broadband customers, they can pay for the service as well," Patterson told BBC News.

"This is a staggering statement of intent from BT, changing the landscape of sports broadcasting and sending shock waves throughout British football.

"Having already secured 38 Premier League games a season, BT has now taken its offering to a whole new level by going all out to land exclusive live rights to the most coveted tournament in club football.

"BT must now hope these prized rights will significantly increase its subscribers and encourage more customers to buy broadband, phone and television services from them.

"Uefa and the clubs will be delighted at the increase in television revenue, but both viewers and sponsors will be concerned that, for the first time since it began, live Champions League games will not be shown on terrestrial TV.

"BT has agreed to show some games free to air, but this will be of little comfort to many fans. The deal represents arguably the biggest defeat Sky has suffered since it began sports broadcasting, and is further proof that its latest rival presents a much sterner challenge than predecessors Setanta or ESPN ever did.

"It is also grave news for ITV which had already lost the FA Cup rights and must now hope it can cling on to the Champions League and Europa League highlights."

John Petter, boss of the company's consumer division, added: "Today, to get the whole competition, you typically have to pay Sky £40 or so a month. The pricing is not being announced today, but I can say that this will be far more affordable than currently."

However, Sky indicated its rival had paid much more than it was prepared to offer.

"We bid with a clear view of what the rights are worth to us. It seems BT chose to pay far in excess of our valuation," read a statement from Sky.

"There are many ways in which we can invest in our service for customers. We take a disciplined approach and there is always a level at which we will choose to focus on something else. If we thought it was worth more, we'd have paid more.

"Nothing changes until 2015 and we look forward to 18 more months of live Champions League on Sky Sports. We will now re-deploy resources and continue to bring customers the best choice of TV across our offering."

BT launched its UK sports channels on 1 August 2013 in a challenge to the dominance of sports coverage on Sky.

Other events in the BT portfolio include the rights to Premiership Rugby and motorsports such as Moto GP and Nascar, as well as taking over ESPN's UK sports channels.

Only last week, it said more than two million people had subscribed to its television sports channels since August and reported six month pre-tax profits of £948 million.

For its part, Sky announced in October that record numbers had tuned into the start of the football season - with an average audience of 1.55m compared with 1.29m last year.

"While Sky has seen off challenges from ITV Digital, ESPN and Setanta, BT is posing the most formidable challenge.

"BT is already in almost every UK home with a telephone line and is also the largest broadband provider in the market. It isn't charging anything to show live Premier League football for existing broadband customers but will be charging for some Champion League games from 2015, although no pricing structure has been published.

"Their aim of becoming the home of live football coverage in Britain takes a giant step forward with this announcement and might even have an impact on Sky shares when trading restarts on Monday."