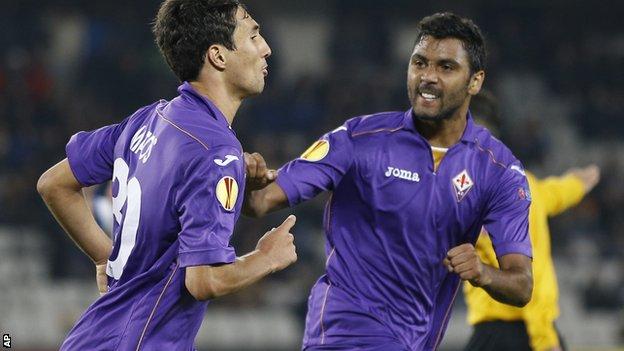 Fiorentina came from behind against Romanian minnows Pandurii Targu-Jiu in Group E to secure their place in the knockout stages of the Europa League.

Goals from Rydar Matos and Borja Valero for the Serie A side cancelled out Eric Pereira's opener in Romania.

Spain's Valencia joined them after a 3-2 win over St Gallen in Group A.

Their fellow La Liga outfit Sevilla failed to secure their last 32 place with two group games to go after they were held by Czech side Slovan Liberec.

Diego Perotti put Sevilla on course for the win that would have put them through from Group H, but David Pavelka pulled Liberec level in Spain.

Ludogorets Razgrad only managed a 1-1 draw against Chornomorets Odesa in Group B but it was still enough to see the Bulgarian side through where they are joined by Austria's Red Bull Salzburg who won 3-1 away at Belgium's Standard Liege in Group C.

In the same group, Denmark's Esbjerg overcame Sweden's Elfsborg 1-0 to secure their place thanks to Marcus Rohden's own goal.

Dnipro's 2-0 win over Portugal's Pacos de Ferreira sees the Ukrainian side through with Fiorentina in Group E.

Genk closed in on a place in the final 32 with a 2-2 draw with Rapid Vienna, while Dynamo Kiev, who sit second in Group G, beat FC Thun 2-0 despite playing over 70 minutes with just 10 men.

Real Betis top Group I after their late win over Vitoria Guimaraes. The Spanish side scored in stoppage time to take their points tally to eight, while Lyon were held 1-1 at HNK Rijeka.

Trabzonspor and Lazio both won in Group J beating Legia Warsaw and Apollon Limassol respectively to edge closer to qualification.