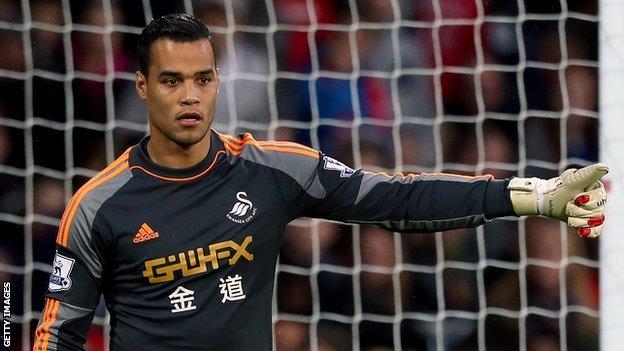 Manchester City's Toure complained he was subjected to monkey chants during his side's Champions League win at CSKA Moscow.

Goalkeeper Vorm hopes the focus will be on events on the pitch not off it on Thursday.

"This is my first time in Russia and I hope for a good experience," Vorm said.

"The Toure story is something that is getting quite big which is logical but I just hope it doesn't happen here and is something we don't want to happen," he said.

"If something happens then the officials know what they have to do about it."

CSKA denied Toure's claims he was racially abused but Uefa has ordered the partial closure of their stadium during the club's next Champions League tie.

Toure suggested black players could boycott the 2018 World Cup in Russia unless the country tackled racism in football.

Swansea will be the first Premier League side to play in Russia since Toure's abuse when they face Kuban Krasnodar in a Group A match.

Michael Laudrup's team are top of the group but go into Thursday's game on the back of defeat by Cardiff City in the south Wales derby.

Vorm, who was sent off during injury time of the game at Cardiff City Stadium, says Swansea need to bounce back quickly in Russia.

"We will try and take any positives that we can but it is good for us to focus on such a very important game because we really need to make up for the game last weekend.

"We made some small mistakes and it's something we can learn from and now this is a good opportunity for us.

"You never want to lose a game, especially against Cardiff, but we always play for our fans.

"We are top of the group but we have come here for one thing and that's to win.

"That's the most important thing and give the fans something to cheer. We are close to winning the group so it's an important game."