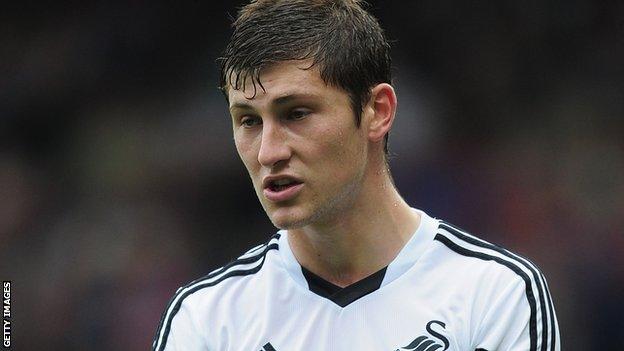 Davies, 20, has missed Swansea's last three games with an ankle injury sustained in the 4-0 victory over Sunderland in October.

The Welsh international was expected to be out for up to four weeks but has recovered quicker than expected.

"I've worked hard every day on my recovery," Davies said.

"I've learnt that you only get out what you put in. As a result, I've virtually cut my rehabilitation time in half.

"I'm back quicker than I thought. If anything I was a bit disappointed I just missed out on the Cardiff game last Sunday.

"But I knew I couldn't rush it, no matter how much I wanted to be part of it, because there's a long season ahead and it was important I was 100 per cent ready.

"The medical staff at the club have been superb.

"They put everything in place for me to come back as soon as possible. I found it very frustrating watching from the stands. I just wanted to be out there helping the team.''

Davies missed Swansea's 1-1 draw against Kuban Krasnodar at the Liberty Stadium last month which saw Michael Laudrup's side maintain their unbeaten record in Group A.

Victory in Russia on Thursday, Davies said, would take Swansea a step closer to securing a place in the knockout stages.

"It's a massive game where three points will give us a great chance to qualify,'' Davies told Swansea City's official website.

"But I think Kuban proved at the Liberty what a good side they are and we will face another very hard game.

"But after Sunday's defeat [against Cardiff] it's also a good chance for us to prove what we are capable of, especially ahead of another important league game against Stoke City this weekend.

"The boys are determined to bounce back.''