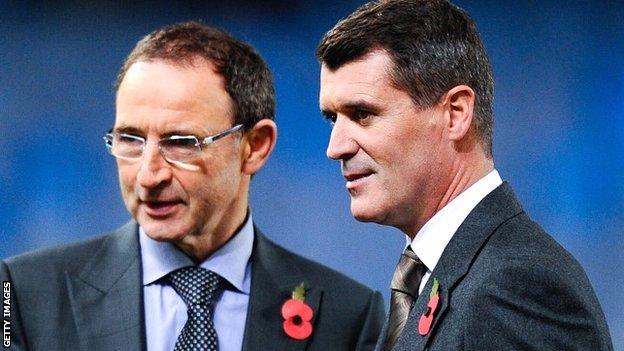 Martin O'Neill and Roy Keane have been appointed as the Republic of Ireland coaching team on a two-year deal.

The Republic parted company with Giovanni Trapattoni in September after failing to qualify for the World Cup.

"I think I'm the bad cop and he's the bad, bad cop," O'Neill, who will take over as manager, told ITV.

"I'm honoured Martin has asked me to work with him," added Keane. "I'm looking forward to working with the players and getting to the Euros."

The Republic's next fixtures are friendlies against Latvia on 15 November and Poland four days later.

O'Neill, 61, who won 64 caps for Northern Ireland, has been out of football since being sacked by Sunderland in March while his assistant Keane, 42, was dismissed by Ipswich in January 2011.

Keane gained 67 international caps, but caused controversy as captain of his country when he quit the Republic squad before the 2002 World Cup after falling out with then manager Mick McCarthy.

"I am very lucky to get another opportunity," Keane added. "I think I have deserved another chance to get back into football. It is great to work with Martin and hopefully we won't let anybody down."

Football Association of Ireland chief executive John Delaney told BBC Sport he and Keane had "an open conversation" when they met for the first time last week.

"I was very taken by him, I was very impressed by him and he was very passionate about a managerial role around this team," Delaney said.

"Martin wanted Roy as his assistant. I'm delighted with that, there is no problem whatsoever."

Delaney has confirmed that businessman Denis O'Brien will once again help to finance the salary of the Republic management as was the case during Trapattoni's reign.

O'Brien was believed to have contributed around half of the previous management team's salaries.

O'Neill began his managerial career at Wycombe and also had spells in charge of Norwich and Leicester before spending five years at the helm at Celtic.

He led the Glasgow side to the domestic treble in his first season and in 2003 took them to the Uefa Cup final where they lost in extra time to Jose Mourinho's Porto.

O'Neill also managed Aston Villa from 2006-2010 and led the club to three successive sixth-placed finishes. He spent 16 months in charge of Sunderland but was sacked after a run of eight games without a win left them one point above the relegation zone.

Delaney added: "Once Martin declared his interest, it became an easy decision to recommend to the board that Martin was the man."

The Republic reached the quarter-finals of the World Cup under Jack Charlton on their maiden appearance in 1990 but have failed to qualify since 2002.

Trapattoni, who was appointed manager in February 2008, guided the team to the finals of Euro 2012 but they lost all three matches in a difficult group with Spain, Italy and Croatia.

In World Cup 2014 qualifying they were beaten 6-1 at home by Germany and could only finish fourth in Group C, with 14 points from their 10 matches.