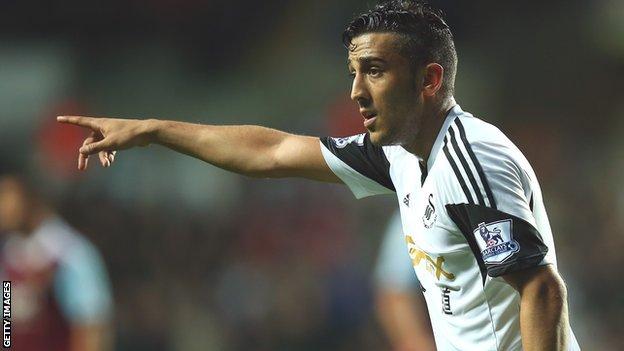 Swansea City's Neil Taylor insists there are no barriers to stop British Asians getting into English football.

The Football Association is to publish plans later this year on how it hopes to get more Asians into the game.

Taylor, 24, is one of eight British Asian players with a professional contract in English football and said: "Hopefully, we'll see more Asian players in the next few years.

"But I don't think there's anything out there stopping people."

Taylor has an English father and his mother is from Kolkata in Eastern India. He was recently voted the British Asian Footballer of Year at the Asian Football Awards.

The defender was a product of Manchester City's academy and previously played for Wrexham before joining Swansea in June 2010 and is a Wales international.

He says he has never experienced any racism and those hoping to emulate his achievements in the English game should have no fears over pursuing a future in football.

The FA is hoping to boost Asian participation at grassroots level in the hope it will filter up to professional level.

"It's not like there's a barrier the FA has to lift up and say right you can now come and coach and play," he added. "There's no discrimination.

"But if they're going to encourage it more that's great and we need more Asians to be playing."

Taylor says he would be willing to work with the FA if he was asked and is already making plans himself to develop Asian players here and in India.

"I'm already trying to do things myself in terms of finding out if there's more talent and how to bring them through," he said.

"I went out to India last year to discover what football was like there. I learnt that it's big - bigger than I was expecting it to be."