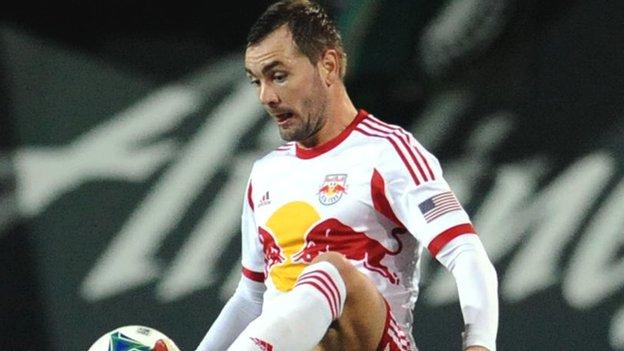 New York Red Bulls midfielder Jonny Steele has been given his first call-up to Northern Ireland's squad for Friday's friendly away to Turkey.

With several players ruled out, Michael O'Neill summoned the 28-year-old into the panel for the game in Adana.

Steele, who is from Larne, has played for a number of clubs in the United States and joined New York's Major League side in February 2013.

Palermo striker Lafferty is unavailable as his wife is due to give birth on the day of the game while midfielder Evans and defender Cathcart are injured.

It was originally thought Steele would miss out on a maiden call-up because of club commitments.

Manager O'Neill had emphasised that Steele was part of his plans and that he had discussed the player's progress with Bulls technical director Andy Roxburgh.

"Jonny is one of those players who has developed later in his career and it's good to have him on board," said O'Neill.

Manchester United defender Evans has been battling back trouble and will be suspended for the start of Euro 2016 qualifying, but has been named in the 20-strong party.

The presence of McAuley and Hughes is encouraging given both men have an uncertain international future.

O'Neill has said in the past that he would speak to the pair, who both turn 34 before the end of the year, about deferring any retirement plans.

By agreeing to make the journey to Adana for the 15 November friendly, they are giving the right signals.

Just two goalkeepers have been included, with St Johnstone's Alan Mannus and Olympiakos' Roy Carroll both likely to see some game time.

The Turks, managed by Fatih Terim, won five, drew one and lost four of their qualifiers and lie 40th in the Fifa world rankings, 50 places above Northern Ireland.

O'Neill's side ended up fifth in Group F after winning one game.