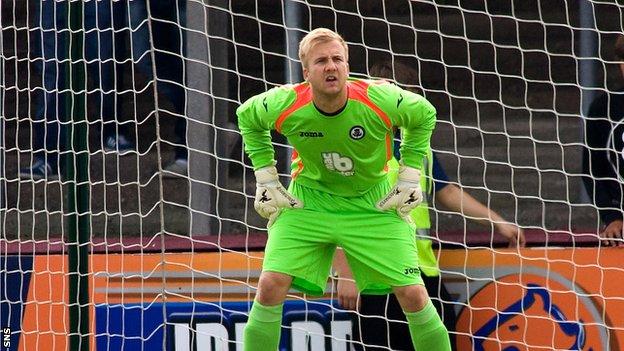 Partick Thistle goalkeeper Scott Fox has received his first Scotland call-up for the friendlies against the United States and Norway.

The Scots welcome Jurgen Klinsmann's USA on 15 November before a trip to Molde four days later.

But strikers Leigh Griffiths and Ross McCormack drop out despite being in scoring form with Wolves and Leeds United respectively.

Midfielders Graham Dorrans, who has been out-of-favour at West Brom, and George Boyd, who has been used mainly as a substitute with Hull City, have also been left out by Strachan.

Fox, who started his career at Celtic and had spells at Queen of the South and Dundee, gets his chances with first-choice Allan McGregor still unavailable through injury.

He joined Thistle three years ago after being released by the Dens Park club and signed a new two-year contract in April and has impressed for Alan Archibald's side in the Scottish Premiership this season.

Strachan said the 26-year-old deserved his first call-up to the national side for the two matches - the one in Norway being broadcast live on BBC television, radio and online.

"In the games I have seen going to watch Partick Thistle live, he has made some big saves," said the Scotland manager.

"He was one of the Celtic youngsters who wanted to go out and play. Scott went on loan to East Fife, he was desperate to play.

"His attitude has got him where he is today."

Fletcher, who last played for Scotland in the 2-1 defeat by Wales at Hampden in March, returns to the squad after recovering from a shoulder injury.

The striker has played the last three games for his club and scored in the north-east derby win against Newcastle United.

However, Strachan pointed out that Griffiths and McCormack could count themselves unlucky to miss out this time.

Still missing for Scotland are Manchester United midfielder Darren Fletcher, who has been battling against illness, and injured Wigan Athletic playmaker Shaun Maloney.

Strachan's side ended their World Cup qualifying campaign with but failed to qualifying after finishing fourth in Group A.

Norway, who last met Scotland in 2009, also missed out on a place at next year's World Cup finals in Brazil.

However, USA have booked their place at next year's finals after finishing top in Concacaf qualifying.