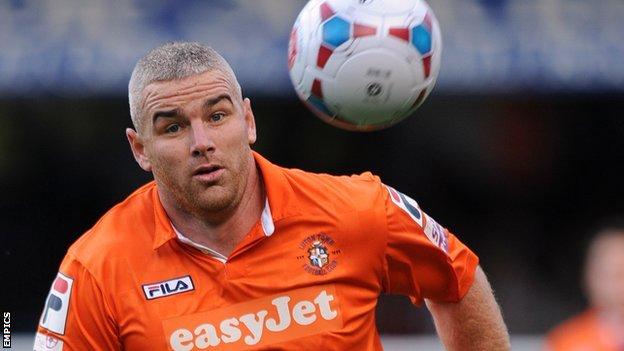 Steve McNulty helped move Luton to second in the table with a spectacular first-half volley against Southport.

Paul Benson hit the post for the hosts before defender McNulty's dipping volley from 25 yards put them ahead.

Andre Gray then set up Jonathan Smith for the Hatters' second, before lashing home his 10th goal of the season.

Luke Guttridge almost added a fourth, crashing an effort off the bar, while Southport's best chance was a deflected Richard Brodie effort.

Luton remain unbeaten in the league at Kenilworth Road this season to move two points above third-placed Kidderminster in the table, and are just four points behind league leaders Cambridge United. Both teams, however, have a game in hand over the Hatters.

Southport crashed to their fifth successive loss in all competitions and have only picked up four points from a possible 33 away from home in the league this term.

"Five goals, six points, we can't ask for more than that. It's good when there's lots of different goalscorers.

"The back four is playing well, at the moment we're looking OK, but it's only one game.

"All we can do is worry about how we plan and the results we get, and as far as I'm concerned that's all very good."

"We knew it was going to be very difficult and we set up to be quite solid. I thought we were quite solid without creating an awful lot of chances ourselves.

"The first goal from Steve McNulty was a fantastic strike. I know him well and he said afterwards that it was probably one of those that he'll never hit like that again.

"If we could have stayed in the game a little longer in the second half, it might have been a little bit different. It wasn't to be and we ended up with the defeat."