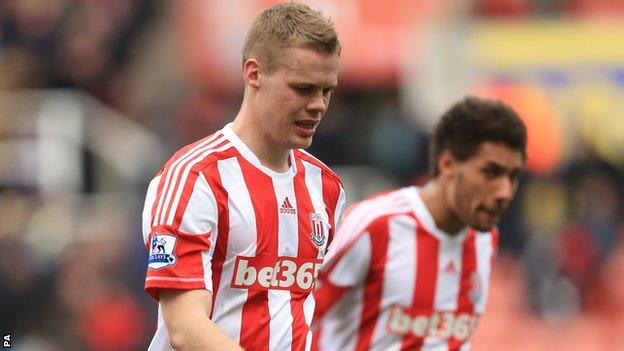 Stoke captain Ryan Shawcross has criticised his team-mates after

Stoke surrendered the lead three times against a side reduced to 10 men in the 45th minute as the game ended 4-4.

After conceding eight goals in Mark Hughes's first 10 games as boss, Stoke have since let in seven in two matches.

A game of fine margins

Only one of Stoke's nine league matches this season has been settled by a margin of more than one goal - a 3-1 defeat against Arsenal.

"All the players must take a long hard look at themselves, me included - it's just not good enough," said Shawcross.

"As soon as they went down to 10 men we should have cruised through the game.

"As brilliant as we were in attack to score four times, defensively we need to improve drastically."

Having squeezed past Birmingham, Stoke will now turn their attention to arresting a slump in form that has seen them plummet to 17th in the Premier League table.

They are now winless in six league games, last picking up three points

"Southampton at home this Saturday is a really big game for us and we have to have a much better focus."