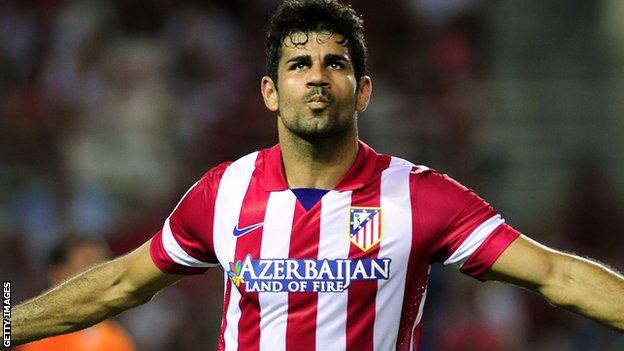 Costa, who holds Brazilian and Spanish passports, has written to the Brazilian Football Confederation stating he wants to represent the world champions.

Costa played for Brazil in March - but only in friendly matches, and so could switch allegiances.

In a statement, the Spanish Football Federation said that the player has stated "his desire to be at the disposition of the Spanish national team manager Vicente del Bosque" in a signed letter addressed to Julio Cesar Avelleda, secretary general of the Brazilian Football Confederation.

This season, Costa has been in superb form for Atletico - the club he has been with since 2007 - and is the top scorer in La Liga with 11 goals after 10 matches.

"I hope people understand and respect my decision because it has been very difficult," he said.

"It was very difficult to choose between the country where you were born and the country that has given you everything.

"I looked at everything and saw that it was right and best to play for Spain because this is where I have done everything. All that I have in my life was given to me by this country."

"I hope people understand because it is not something against Brazil," he added.

"I have family in Brazil and it is the country where I was born. I hope that God allows me to live there again in the future."

Should he be selected, he could make his Spain debut on 19 November in a friendly against South Africa.