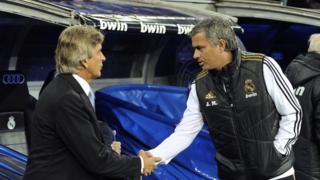 Mourinho mocked Pellegrini after replacing him at Real Madrid in 2010, with the Portuguese manager saying that if he was ever sacked, "I won't be going to coach Malaga. I will go to a big club in the Premier League".

Pellegrini - who went to Malaga after leaving Madrid, then joined Manchester City during the summer - faces Mourinho for the first time in English football on Sunday, in the pick of the weekend's Premier League fixtures.

Scottish Premiership: Livingston 2-2 Celtic - Lennon's side 20 adrift after another draw