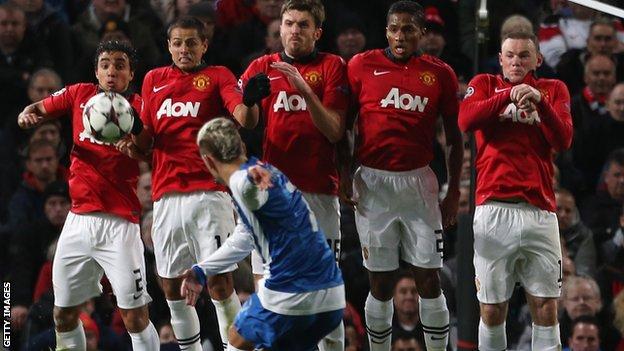 Manchester United moved a step closer to the Champions League knockout stages with a narrow victory over Real Sociedad.

Inigo Martinez's second-minute own goal - which also owed much to superb work by Wayne Rooney - ensured United maintained their unbeaten record in the competition this season.

United manager David Moyes will have made three points his sole objective after the disappointing 1-1 Premier League draw at home to Southampton on Saturday and in a week when their European campaign has been reduced to a sideshow by revelations in former manager Sir Alex Ferguson's new autobiography.

And on the night when United gave a trial to Old Trafford's new 'singing section', they at least had something to celebrate - unlike the 6,000 colourful visiting fans who followed Sociedad.

The La Liga side made United work hard for the win but it was one they fully deserved despite some anxious moments, particularly when Antoine Griezmann hit the post with a first-half free-kick.

Rooney was once again United's main source of danger as he continued the outstanding form he has shown this season.

If there are any complaints from Moyes, they will have centre on his side's inability to finish the game off earlier - as well as some questionable defending that offered Sociedad hope.

And at least Moyes was finally able to move the agenda away from his predecessor Ferguson, who has claimed the headlines this week and overshadowed this important Champions League game as he raked over his 26 years in charge at Old Trafford.

Once again, this was not a fluent United performance but the result will give them added confidence ahead the return meeting away to Sociedad in a fortnight.

Moyes decided against risking striker Robin van Persie, who has been suffering with toe and groin injuries - but Rooney's irresistible form meant the Netherlands international was not missed early on as United were ahead inside two minutes.

Rooney demonstrated perfect technique and speed of thought to evade three defenders in the area, only to curl a shot against the post with keeper Claudio Bravo beaten. As Sociedad appeared to have survived, Martinez sliced the rebound hopelessly into his own net.

Sociedad had a valid claim for Javier Hernandez being offside as Martinez did his unwitting work but Dutch referee Bas Nijhuis and his officials were unmoved by the complaints.

Rooney was at the heart of everything early on and almost added a second after 12 minutes - but Bravo was equal to his volley from Rafael's cross.

From hesitant early beginnings, Sociedad grew in confidence into the game and were desperately unlucky not to equalise before half-time.

David De Gea had already saved athletically from Haris Seferovic but he could do nothing to stop Griezmann's free-kick and was relieved as it bounced away off the woodwork.

Sociedad continued to improve after the break but United were creating chances as Phil Jones saw his header blocked by Bravo and Antonio Valencia's low, angled shot struck the post.

Fortunately for United, Sociedad had lost the impetus they gather in the early moments of the second half and did not make United pay for those missed chances.

Manchester United boss David Moyes: "Yes [I was frustrated] because we had it on Saturday in a Premier League game when we lost a late goal. If we had scored five or six today it wouldn't would have looked out of place.

"I'm concerned we gave away couple of free kicks on the edge of the box. But Wayne Rooney was absolutely terrific tonight, I was shouting at him in the last five minutes though.

"We just want a top player like Wayne to play well. I said from day one that his training was great. I think England have seen that. But we need to see it all the time."