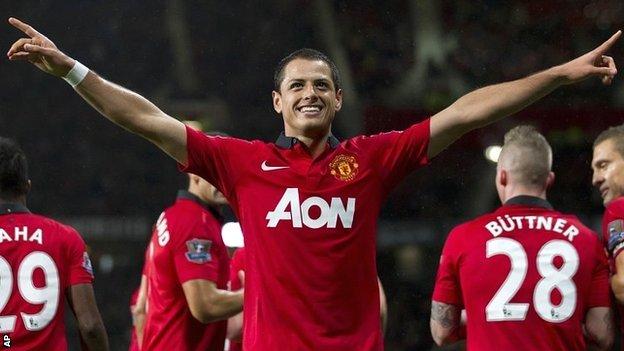 The Mexican converted from the spot after Adnan Januzaj had been brought down by Leroy Fer before nodding in after the break.

Phil Jones rifled home a volley before Fabio crowned the win with a precise finish from Wayne Rooney's lofted pass.

Johan Elmander poked wide from a good, but rare, chance for the visitors.

An apparently serious injury to Robert Snodgrass, who was carried off after a clash of heads, added to Norwich's disappointment.

Hernandez on the goal trail

The victory extended United's unbeaten run to six games and, despite some indifferent performances during that time, there does seem to be some momentum building after a stuttering start to manager David Moyes's reign.

Moyes will have been particularly pleased by Hernandez and Belgian teenager Januzaj, who carried the vast majority of the hosts' attacking threat, staking convincing claims to more regular first-team action.

In the opposing dug-out, Chris Hughton was left to contemplate a toothless display as his struggling Norwich side rarely caused Manchester United any discomfort. They have taken a draw and three defeats from four games in October.

Norwich's Nathan Redmond sent a shot trailing wide after skipping into the United box, but the visitors were up against it soon afterwards as Hernandez sent goalkeeper Mark Bunn the wrong way from the penalty spot to open the scoring.

Hughton's players complained loudly and at length over referee Kevin Friend's decision to award a spot-kick for Fer's challenge on Januzaj, but rarely showed as much energy in attack.

Lone striker Elmander did get some much-needed support as the visitors improved markedly at the start of the second half.

But the Swede could only flick Redmond's cross into the advertising hoardings and three minutes later Hernandez forced in Alexander Buttner's cross at the second attempt as the visitors' revival proved short-lived.

A lengthy break in play following Snodgrass's collision with Rafael robbed the game of rhythm, before United finished strongly to add further gloss to the scoreline.

After Jones had swept home a sweet volley, Fabio collected substitute Wayne Rooney's chip forward and slipped home a near-post finish in the second of 11 minutes of injury time.

Norwich return to the north-west to play Manchester City on Saturday and, with five points separating them from the bottom of the Premier League table, may accept the end of the Cup run in exchange for three points at the weekend.

Manchester United assistant manger Steve Round: "Javier Hernandez is such a good character. I don't think [his lack of first-team action this season] has fazed him at all.

"He is a really infectious character who loves to score goals.

"He has waited patiently for his opportunities and when he gets them he has taken them."

Norwich manager Chris Hughton: "We could have been better on the ball.

"But we were given a penalty against us which was incredibly soft.

"To have a penalty given against us, in that fashion, as soft as that, really gives Manchester United a lift and deflates you.

"But they scored good goals, they have got great quality and they are clinical in everything they do."