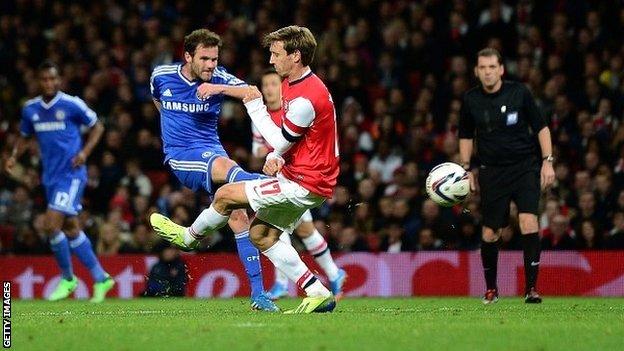 Juan Mata scored his first goal of the season as Chelsea comfortably beat Arsenal to reach the Capital One Cup quarter-finals.

Cesar Azpilicueta gave Chelsea a first-half lead on the break from an Arsenal corner, latching on to Carl Jenkinson's poor header back and poking in.

Aaron Ramsey fired a shot wide from 25 yards as Arsenal struggled to get a grip on the game.

Mata sealed victory after the hour mark with a sweet strike from 20 yards.

The Spaniard, who made only his sixth start of the season, was the shining light in a one-sided game where Chelsea demonstrated their superior squad strength to earn their sixth successive triumph.

Both teams made multiple changes to their teams after the weekend's Premier League action, but Michael Essien and John Obi Mikel bossed midfield with a combination of guile and muscle while Willian and Samuel Eto'o were sharp in attack.

In a repeat of the 2007 League Cup final - which Chelsea also won - the result marked a second consecutive home defeat for Arsenal, the first time this has happened since February 2013, and reduces their chances of ending their eight-year trophy wait.

Although it was a largely second-string Gunners side, with Nicklas Bendtner poor up front, the defeat was a worrying sign ahead of a tough run of games that include Liverpool, Borussia Dortmund and Manchester United.

Chelsea manager Jose Mourinho, who kept only Gary Cahill in the side following victory over Manchester City on Sunday, rarely had reason to be concerned in what was his first match against Arsenal boss Arsene Wenger since May 2007.

Although the visitors only led by Azpilicueta's goal at the break, they enjoyed the majority of possession, were quick to close down and more composed on the ball.

By contrast, Arsenal were laboured and not helped by lone forward Bendtner, who struggled to hold the ball up in his second start of the season.

After easing their way into the game, Kevin De Bruyne tested Lukasz Fabianski with a curling effort before Chelsea took the lead after 26 minutes.

Arsenal have been criticised for failing to defend properly from their own corners this season, and again they succumbed to a counter attack.

Chelsea burst forward and after Ramsey's block on Essien's through ball looped up into the air, a poor back header from Jenkinson was poked in by Azpilicueta for his first Chelsea goal.

The goal signalled an improvement by Arsenal, who made eight changes to the side that beat Crystal Palace on Saturday, and one of them, Nacho Monreal, fizzed an angled shot wide soon after.

Eto'o fired wide in front of 9,000 visiting fans before Ramsey hit a strike past the post from 25 yards.

Then, despite Mesut Ozil coming on to improve Arsenal's fortunes, they went further behind to a classy Mata goal.

Ryan Bertrand's throw-in reached Eto'o on the goal line and when the Cameroon international cut the ball back, Willian nodded it onto to Mata, who struck in a sweet right-foot shot from 20 yards.

Bendtner was mercifully replaced by Olivier Giroud and the French forward's close-range shot was saved by Mark Schwarzer but substitute Ramires came close to extending the lead at the near post before Laurent Koscielny cleared.

"Given we had to play the game tonight, which I know Jose [Mourinho] has documented was far from ideal with one day between the matches, it gave us no choice really but to use the full squad.

"Every player in the squad deserves great credit for their performances in the three days."