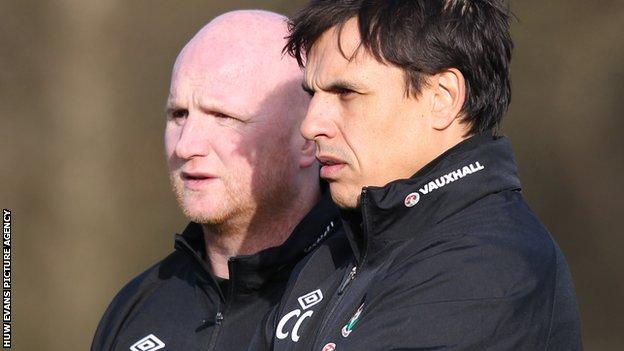 Hartson, capped 51 times, was prepared to leave in the wake of media criticism of Coleman's backroom team.

"I've offered to resign a couple of times in the last couple of months but Chris wants me there," he said.

"He feels I've got a lot to offer the players having played up front on my own for 10 years for Wales.

"You're always going to get criticism. I'm very relaxed about it. I've come through cancer for goodness sake - I don't worry about coaching roles with Wales."

"I really do hope that he [Coleman] gets his opportunity to take Wales into the 2016 qualifiers because I genuinely believe this is going to be a great period."

The former Arsenal striker had emergency surgery in 2009 after he was diagnosed with testicular cancer that had spread to his lungs and brain.

He joined Coleman's staff after his former international team-mate was appointed manager.

Hartson said: "I've had a fantastic welcome from the lads and I enjoy it.

"If he [Coleman] decides to take the job on and he wants to let myself, [coach] Kit Symons and [coach] Osian Roberts go, then that's fine by me.

"If he takes me on then I'll probably stay with him."

There is still uncertainty over former Fulham and Coventry City boss Coleman's position with the national side.

Coleman has not decided if he wants to carry on as manager after his contract expires in November.

The Football Association of Wales (FAW) has been in talks with the 43-year-old, who took charge in January 2012.

Wales ended their unsuccessful World Cup qualifying campaign with a 1-0 win over Macedonia and a 1-1 draw in Belgium.

FAW chief executive Jonathan Ford will assess Coleman's overall record in the job, and Hartson believes the manager should be given a new deal.

"I hope the FAW can get their heads together and actually give him a new two-year contract because I think he is the man to take us forward," Hartson said.

"I talk to Chris about many topics but the one thing I don't discuss with Chris is his personal situation.

Hartson believes Wales are entering a "great period" as they prepare for the Euro 2016 qualifying campaign.

He added: "I don't think it's a great time to bring the next manager in right now because we have given players an opportunity.

"We've got a great mix of youth and experience."