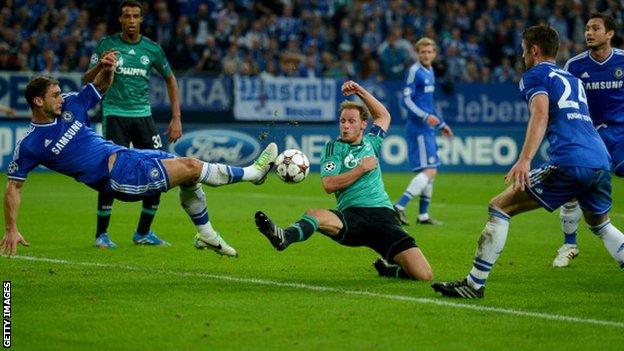 Fernando Torres marked his 100th Chelsea start with two goals as his side recorded an impressive win at Schalke to go top of Group E.

The Spain striker gave his side an early lead after Frank Lampard's corner was flicked on by Branislav Ivanovic.

Torres was denied by the bar before capping an excellent display with a simple finish following a break involving Oscar and Eden Hazard.

Hazard added a third in the closing stages with a composed finish.

Schalke went close through Roman Neustadter but Petr Cech saved well on a night when Jose Mourinho's Stamford Bridge side stamped their authority on the group.

The Blues might have started the European campaign with a surprise home defeat to Basel last month, but the scars from that night have now well and truly healed.

They reach the midway point of the group stage with their destiny in their own hands, level on points with Schalke with three games still to play.

On a highly satisfactory night in Germany, Chelsea took an early lead through Torres' first away goal in the competition since scoring in the Nou Camp against Barcelona in the semi-final in April 2012.

Mourinho's side never looked back after going in front and, but for a spell towards the end of the first half, were never really troubled.

Torres' opener was his 38th goal for the club he joined for £50m January 2011 - and he should have had his 39th in the 51st minute when his towering header from a curling Lampard free-kick rattled the Schalke bar.

Cech was tested on his way to a second straight clean sheet in the competition, with his finger-tip stop from Neustadter's header when Schalke were at their most threatening shortly before half-time the pick of his saves.

Benedikt Howedes squandered a great chance to equalise before Torres, who was impressive all night, doubled Chelsea's lead after Hazard used his pace and strength to set up the former Liverpool frontman to slot home from close range.

Hazard then rounded off a fine night with the third - a terrific finish - in the 87th minute to leave the Schalke fans heading for the exits.