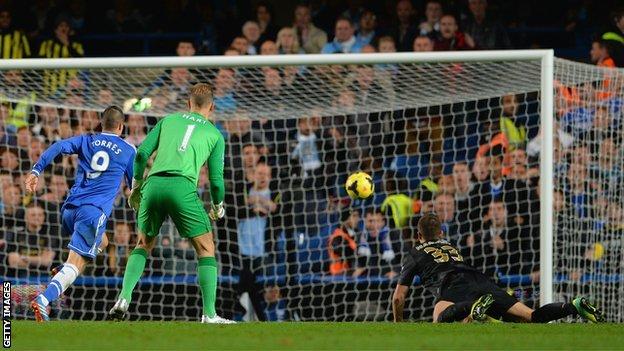 Fernando Torres capitalised on a last-minute calamity in Manchester City's defence to give Chelsea victory at Stamford Bridge.

Sergio Aguero's stunning equaliser looked to have given the visitors a point until a breakdown in communications between goalkeeper Joe Hart and central defender Matija Nastasic allowed Torres to pounce and send Chelsea manager Jose Mourinho into the crowd in celebration.

Nastasic looked in prime position to clear Willian's speculative long ball but Hart's dash from goal appeared to panic the 20-year-old Serb, who headed the ball beyond his keeper and Torres won the race to turn the ball home.

Torres had been the game's central figure, setting up Andre Schurrle's first goal since his £18m summer move from Bayer Leverkusen as well as missing a sitter and hitting the woodwork as Chelsea earned a deserved half-time advantage.

"It was a very fine game, which Manchester City will feel unfortunate to lose. Chelsea kept going even when City monopolised the second half. It was a misunderstanding for the crucial goal."

Aguero's excellence helped City back in the game and manager Manuel Pellegrini looked distraught as he made his way down the tunnel after watching his team miss out on a point he will feel their endeavour deserved.

For Chelsea, it was joy unconfined as they moved up to second in the table and the name of Torres rang around Stamford Bridge at the final whistle as the £50m striker delivered yet more hints that his career may be ready to undergo a renaissance under Mourinho.

There was an element of a gamble about Pellegrini's team selection as, in the continued absence of injured captain Vincent Kompany, he gave a debut to Martin Demichelis.

The 32-year-old Argentine has been sidelined by a knee injury since making a £4.2m move from Atletico Madrid at the end of August, and he came into the heart of the City defence as Javi Garcia pushed into a defensive midfield role.

Torres was guilty of a dreadful miss when he shot wildly over the bar with only Hart to beat, but his general play had been excellent and he was heavily involved as Chelsea took the lead after 33 minutes - racing past Gael Clichy with ease before setting up Schurrle's simple finish.

Torres nearly added a stunning second, beating Demichelis to send in an angled effort which left Hart helpless but it struck the angle of post and bar.

Aguero, operating as a lone striker, needed constant attention from Chelsea's defence and gave a hint of what was to come when his powerful shot was blocked at the near post just before the break.

However, there was nothing Cech could do about Aguero's leveller just four minutes after the restart. The Argentine showed great positional awareness to stay on-side then delivered a finish that startled the motionless Cech and flew in high at the near post.

City found fresh impetus and Garcia should have done better than head straight at Cech, who then saved David Silva's low shot with his feet.

Despite both sides pressing forward, a draw looked the likeliest outcome until City somehow contrived to let in Torres and surrender an important three points to their title rivals.