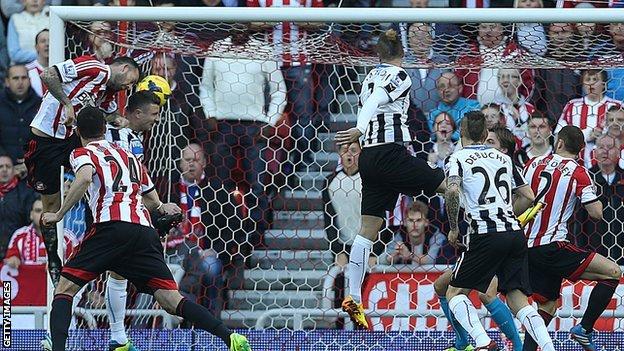 Fabio Borini's late strike helped Sunderland beat Newcastle and secure a first win of the season to lift them off the bottom of the Premier League.

The home side took the lead when striker Steven Fletcher headed in Adam Johnson's cross after five minutes.

With six minutes left, substitute Borini struck from 20 yards to win it.

The celebrations at the final whistle from Sunderland boss Gus Poyet, his players and the packed home support at the Stadium of Light illustrated the importance of the victory.

Not only was it a second successive victory against the Magpies, but one they hope will kick-start a push up the table.

Newcastle were embarrassed 3-0 by the Black Cats in April and, although they gave a better account of themselves this time, the manner of their fourth defeat of the season will have come as a painful blow.

The plan took just five minutes to come to fruition as Johnson clipped a cross to the far post where Fletcher overpowered inexperienced centre-back Paul Dummett to head the hosts into the lead.

"Newcastle were well on top for long periods in the second half. But this is the type of result that can turn Sunderland's season around."

The Black Cats were dominating proceedings and when a well-struck Fletcher shot was parried by goalkeeper Tim Krul, Dummett hesitated in clearing the loose ball - but Sunderland forward Jozy Altidore failed to capitalise.

The home side's tenacity limited the visitors to ambitious shots from distance in the first half but an inability to maintain their level of performance and concentration has been a weakness this season, and Newcastle took advantage after 57 minutes.

Ben Arfa struck a low shot from the corner of the area and left winger Johnson allowed Debuchy to arrive unmarked at the far post and slot in an equaliser.

And it nearly got worse for Sunderland when Yohan Cabaye curled a shot narrowly wide.

Poyet then introduced on-loan Liverpool striker Borini, and the 22-year-old almost had an immediate impact when his shot squeezed through Krul's legs before the Magpies keeper recovered to gather the ball.

Shola Ameobi sent an effort wide as Newcastle saw a chance to snatch victory, but when Borini latched on to an Altidore lay-off, the Italian launched a rising shot past Krul to ensure it was the home side who celebrated - and provide fresh optimism that a dismal start to the season can be turned round.

"I thought we were the better team. We just switched off and [Borini] has hit it true. We are really disappointed.

"I'm just disappointed for everybody at Newcastle.

"We will have to bounce back and be strong. This is always a high-profile game and we have lost it."